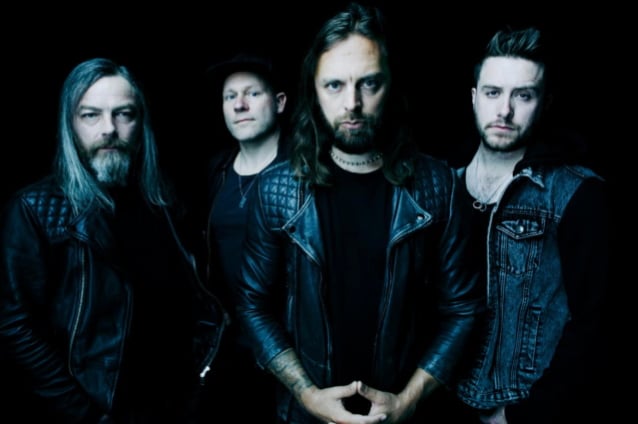 BULLET FOR MY VALENTINE To Release New Single, 'Omen', On Friday

BULLET FOR MY VALENTINE will release a new single, "Omen", this Friday, April 8.

The Welsh metallers shared a snippet of the song in a social media post earlier today. They wrote in an accompanying message: "OMEN. The new single. Coming this friday. Be ready. #BFMV #BulletForMyValentine #OMEN".

Last December, BULLET FOR MY VALENTINE frontman Matt Tuck spoke to NME about the fate of the six songs which were recorded during the sessions for the band's recently released self-titled album but were left off the final track listing, to be made available at a later date. Asked if the unreleased material follows in the same direction as "Bullet For My Valentine", Tuck said: "They're part of the same writing and recording process. Some of them are quite different and unique. We didn't want wanna put them on 'cause they were curvebally. But they were curvebally enough to have a spotlight on 'em post-album. We wanted the album to be a really solid, cohesive body of work from front to back and we didn't wanna throw too many creative curveballs in the album. We thought it was actually better to keep them off for standalone singles post-record and maybe have some kind of really crazy EP maybe at the end of the cycle, just so people can hear them, so they get the light of day. But, yeah, they're heavy, they're interesting, they're pushing boundaries and they're super exciting."