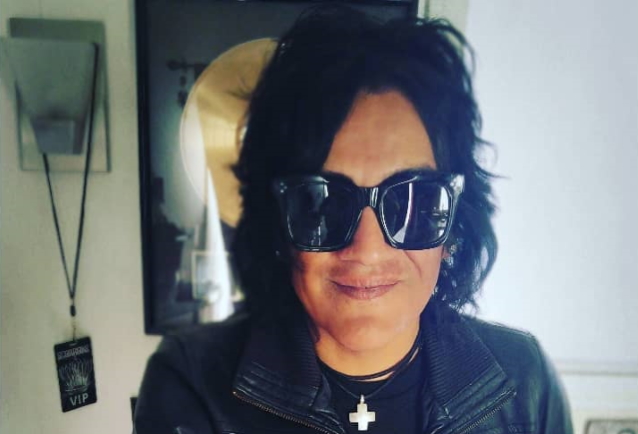 In a new interview with "The Chuck Shute Podcast", BULLETBOYS vocalist Marq Torien confirmed that he auditioned for the singer position in MÖTLEY CRÜE following the departure of original frontman Vince Neil in 1992. He said: "I'm very close with MÖTLEY, and I love them to death still. We don't get to see each other very often, but I love them with all my heart. I still text Tommy [Lee, drums] all the time, talking back and forth every once in a while.

"But, yeah, there was a time where they were having trouble with Vince," he continued. "I have mad respect for Vince — Vince is a friend of mine and I love him dearly. Nikki [Sixx, bass] called me in to talk about singing in the band. We worked together a little bit. We wrote a couple pieces, a couple of ballady type of things.

"It was just hard," he added. "I really wanted to help my friends, but I didn't wanna leave my band. And we [BULLETBOYS] were coming up to the apex of our popularity, and Nikki was just, like, 'You know, Marq. We're so close, I don't think this is gonna work. We've known each other for so long… We're gonna find somebody… But can you do me a favor? Can you hook me up with with the singer from THE SCREAM? The guys that you had opening up for you on the 'Freakshow' tour. 'Oh, yeah. Johnny. 'Yeah, I love that guy; he's great. He's a great singer.'"

Marq went on to say that he had a hand in getting John Corabi into MÖTLEY CRÜE.

"I just gotta be honest with you, and John will probably I tell the same story, I discovered John Corabi at Gazzarri's when he was playing in a band called ROXANNE," he said. "And I stumbled out of a limo, a limousine, completely drunk and high, and walked in and heard this guy, I saw this guy sing, and I couldn't bloody believe it. He was just amazing. My friends of mine from THE SCREAM, Bruce Bouillet and Johnny, John Alderete, were looking for a singer. So I found this guy, we became friends. I was just, like, 'Hey, listen, I think I have a band for you to play in, but you're gonna have to leave this band…' I love Johnny to death. So I was able to talk to them get John and [John Alderete] on the phone, and they hit it off and he joined THE SCREAM."

Regarding how Corabi ended up in MÖTLEY CRÜE, Torien said: "Nikki loved THE SCREAM record and loved Johnny's voice and his writing. And that eventually put him into MÖTLEY. That [self-titled MÖTLEY CRÜE] record is incredible with him. I know it's a different path for MÖTLEY, but they worked so hard on it. I was privileged to hear some of the roughs in the beginning — John was playing it for me — and it was just incredible. We were just sitting in the car. We were grabbing each other's legs, you know? 'Can you fucking believe it? Oh, my God! Dude, this is incredible!'

"When something's magical, as a musician, as a writer… you get to that point where the excitement is, like, 'Yeah!' I'm still like that. So, at that time, I was just so proud of him.

"I could never join MÖTLEY, because there's only one singer for MÖTLEY CRÜE, in my opinion, which is Vince Neil," Marq explained. "Vince Neil is the voice of MÖTLEY CRÜE. He's a legend, a star and my brother, so it wasn't something that I thought that I could really go and [do]. Nikki was already ahead of the game. He was, like, 'Man, we tried it. I love you, but kick ass in the band.'

"But, yeah, that's pretty much it as far as [what] my recollection of the whole situation was."

The original BULLETBOYS lineup made its live return last December with a sold-out performance at the Whisky A Go Go in West Hollywood, California.

Aside from one show in 2011, BULLETBOYS — featuring Torien, Jimmy D'Anda (drums),Mick Sweda (guitar) and Lonnie Vencent (bass) — had not performed together since 1993.