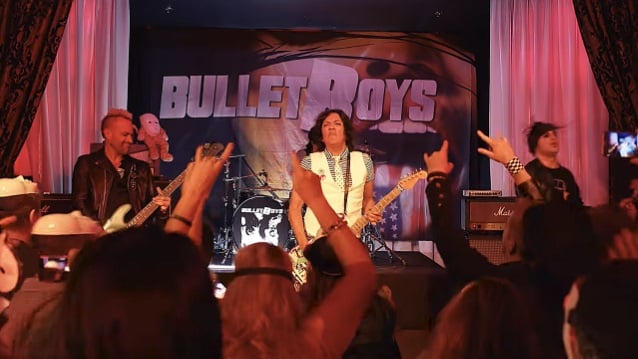 BULLETBOYS To Release 'From Out Of The Skies' Album In March; 'D-Evil' Music Video Available

BULLETBOYS will release their new album, "From Out Of The Skies", on March 23 via Frontiers Music Srl. The disc was recorded at the Dave Grohl's Studio 606 in Northridge, California.

BULLETBOYS vocalist, guitarist, and founding member Marq Torien stated about the track: "Jesse and I had an instant bond when we met and he did an outstanding job collaborating on the song with his vocals a welcome contribution."

Regarding the making of "From Out Of The Skies", Torien said: "Writing and recording 'From Out Of The Skies' was a humbling experience and recording this unpredictable album at the FOO FIGHTERS' Studio 606 was unbelievable and magical. Dave Grohl's music got me through a very difficult time, so from day one I knew that we were in the right home to record. I was privileged enough to use one of Dave's acoustic guitars to record with along with a hand-picked drum set by Taylor Hawkins. I appreciate the opportunity to record there."