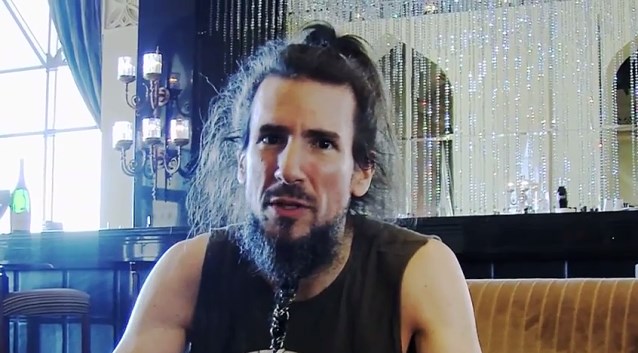 GUNS N' ROSES guitarist Ron "Bumblefoot" Thal was interviewed on the latest episode of "Totally Driven Radio", the weekly radio podcast heard live every Thursday night from 8 p.m. to 11:00 p.m. EST on the VOC Nation Radio Network. You can now listen to the podcast using the audio player below.

Asked about GUNS N' ROSES' continual stage tardiness, with long waits for singer Axl Rose just as much a definite at a the band's concerts a couple of years ago as hearing "Paradise City" or "Welcome To The Jungle", Thal said: "That hasn't happened for a long time. But it did for a long time. And that's not something that I can ignore and pretend hasn't happened or didn't happen.

"I absolutely had the hardest time out of anybody in the band with that stuff — with 'late' stuff.

"I'm always in touch with one very simple thing: you make music to make people happy. You put on a show, you entertain — whatever you wanna call it — you do it to make people happy. And to be happy, and to just share this great moment together. And anything that takes away from that or undoes that or creates the opposite of that is completely just anti why you're doing what you're doing. So if there are 20,000 people that are pissed off, 'cause we just left them…

"I mean, hell, if I have to wait five minutes longer in a doctor's office, or in traffic or something like that, I'm starting to get annoyed. So imagine, if that's five minutes, imagine two hours. Yeah, I get it; I totally get it. It's not like I don't care, it's just… there's nothing I can do.

"But that was something I had a very hard time with, and there's been times when I just walked off stage and just started throwing a fit on the side. I had a really hard time with that, and I understand, and I know. And it's not just that, it's not just the waiting, it's the fact that... if you're gonna do that to someone that isn't expecting that and has a babysitter waiting, or you have to be up in four hours for work, or whatever it is, or the buses are gonna stop running soon, or whatever it is...

"It's, like, you didn't go out that night and buy those tickets and do us the honor of having your presence there just to stain our existence so that we could completely fuck you and inconvenience you and put you in this position wher, alright, 'My life is gonna be really annoying, and I have to choose between missing the show after waiting for it, or seeing it.'

"I've gotten so much resentment over that from people. And they have the right. And I'm just happy that that's not happening anymore. And I'm really, really happy that we've been going on time, close to on time, sometimes early. And I know the fans are very happy; the people that come to the show are much happier about that.

"There's always the fans that are, like, 'Nah, it's a rock concert. They should be three hours late.' Maybe for you, but not for the other 20,000 people… Everyone's got responsibilities. Rent isn't what it was in the '70s. There's a lot more living hand to mouth, and you can't fuck with that. And I get it. And this is not some kind of, like… I'm not trying to bash Axl or anything. I get it. And I'm just glad that we've been doing better with that."

In an August 2010 radio interview, former SKID ROW singer Sebastian Bach, a close personal friend of Axl Rose, offered an explanation for why the GUNS N' ROSES frontman is persistently late going on stage. "Everybody has all these theories as to why he acts the way he acts, and there's no big mystery," Bach said. "He tells me the source of all of the insanity — it's his voice. It's his job to sing like that, and sometimes that sound is hard for him. And a lot of singers, you know... To sing in that range is just not an easy thing to do. And he does what he can, and it takes him 45 more minutes to warm up his pipes so he can sing 'Sweet Child O'Mine'."