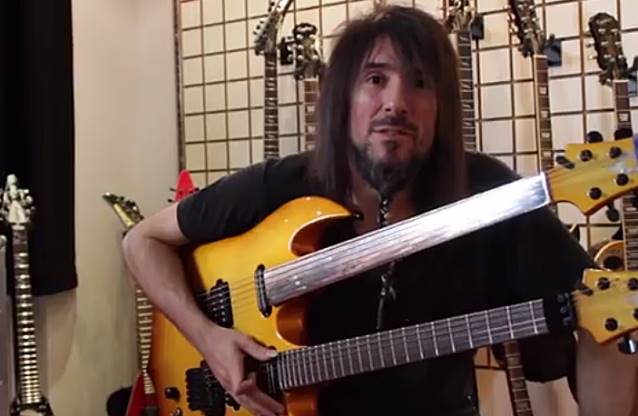 BUMBLEFOOT: If I Have To Choose Between GUNS N' ROSES And The Rest Of My Life, I'm Out

On November 22, GUNS N' ROSES guitarist Ron "Bumblefoot" Thal and the drummer of his solo band, Dennis Leeflang, were interviewed on Chile's Radio Futuro prior to their first-ever performance in Santiago the next day.

Speaking about first visit to Chile as a solo artist, Thal said (hear audio below): "It's funny… Before GUNS, Dennis and I would be touring, mostly around Europe, and things were building up — I was putting out more albums and everything was growing. And then I joined that other band… [laughs]

"I didn't want to slow everything down, but every time I tried to book anything [with my solo project], it seems like the running gag was, 'Hey, if you want GUNS N' ROSES to hit the road, all you have to do is book your own tour. And they'll [GUNS N' ROSES] book one at the same exact time and you'll have to cancel yours.' And it reached a point where we got so busy with the [GUNS N' ROSES] touring that I just wasn't able to plan anything.

"Also, the rest of humanity tends to plan things in advance where GUNS N' ROSES tends to plan things the day before. So it's really tough. We could be planning something [for my solo project] for next April, and then GUNS will book something March 31 for April, and all your plans are just… Suddenly you're in this situation where you have to choose. And I'm actually trying to work out something with [the GUNS N' ROSES] management now so I don't have to choose. Because if I do have to choose — and I'm saying it here first — I'm choosing my own life; I have to. If I'm gonna be painted into a corner where I have to choose between being in GUNS N' ROSES and the entire rest of my life, and if they're not willing to help me keep the two functioning well together, then I'm out. So hopefully they're willing to do that. And I've reached out a few days ago and I'm just waiting to hear back.

"We were supposed to tour… We had this tour [booked for my solo project] in January/February that I changed for GUNS stuff in December and January and then that stuff got canceled. And all the changes were for nothing, and the changes came at a very big loss. And it also came at a detriment to my name. It's, like, you book something with booking agents and promoters, and their biggest concern is that you're gonna cancel because GUNS is gonna book something, and then you do that, they're gonna be very reluctant to wanna book again, 'cause they're worried about the same thing happening. So I can't let that happen anymore. So I'm in a situation now…

"I think what happened was, I was doing the solo stuff and everything was growing, and as soon as I joined GUNS, it's, like, everyone just hit 'delete' on my entire life and everything I did and I just became, 'Oh, he's the new guy in GUNS.' Even after 15 years, 20 years of putting out music, people say, 'Oh, I didn't know you sang. Oh, I didn't know you did other things.' And that's not right, that's not good, because I've put out more music than GUNS.

"I just feel like I need to introduce myself to the world as who I am and say, 'Yeah, I'm the guitar player in GUNS N' ROSES, but this is who I am now. And I want you to know me, my music, and it's all starting in South America here, in Chile."

Asked if there are any plans for GUNS N' ROSES to do anything in the near future, Thal said: "Good question. I've been asking them about plans for a couple of weeks now; I'm waiting for answers. I don't know. I'm guessing… If I had to guess, I would think that next year we're gonna do something. But I haven't had any response to my communication, so I don't know."

When pressed to describe GUNS N' ROSES singer and sole original member Axl Rose in one word, Thal said: "I don't think you can describe that guy in one word; he runs so deep. Yeah, he's not a one-word thing."

He continued: "[Axl] absolutely is [a cool guy]. He's very fun and welcoming and a wonderful host when you're hanging out with him and just loves to see everybody enjoy themselves and makes everybody feels comfortable. Unless you don't treat him like a person, and then he's gonna respond like a person that's not been treated like a person.

"That's the thing about him — he doesn't act like a celebrity, he acts like a person. And if you treat him like a normal person, you'll have a great time, like you would with anybody. But if you treat him like he's not human, then, yeah, [it's like it is with] anybody — your guard goes up, because it's just not natural and it's not normal and you don't see yourself that way. You just see yourself as human; the same person that you were born as."

Thal also elaborated on the plans for his solo career, telling Radio Futuro: "I wanna do more shows. I wanna get out and tour more. And I wanna build up what I didn't maintain and let fall to the side. I wanna get back to doing what I do and doing it everywhere I can. I wanted to do a full South American tour in November/December, but when I had to reschedule the European stuff, it kind of squashed everything."

Thal admitted in a recent interview with the "Totally Driven Radio" podcast that he was not pleased with GUNS N' ROSES' shows consistently starting very late due to Axl Rose's tardiness. Although he said "that hasn't happened for a long time," Thal revealed, "I absolutely had the hardest time out of anybody in the band with that stuff… I mean, hell, if I have to wait five minutes longer in a doctor's office, or in traffic or something like that, I'm starting to get annoyed. So imagine, if that's five minutes, imagine two hours. Yeah, I get it; I totally get it. It's not like I don't care, it's just — there's nothing I can do."

Thal continued, "There's been times when I just walked off stage and started throwing a fit on the side… it's not just the waiting, it's the fact that, if you're gonna do that to someone that isn't expecting that and has a babysitter waiting, or you have to be up in four hours for work, or the buses are gonna stop running soon, or whatever it is…"

Thal added, "There's always the fans that are, like, 'Nah, it's a rock concert. They should be three hours late.' Maybe for you, but not for the other 20,000 people… Everyone's got responsibilities. Rent isn't what it was in the '70s. There's a lot more living hand to mouth, and you can't fuck with that."

The guitarist reiterated that the band is doing better with starting its show on time, saying, "I'm really, really happy that we've been going on time, close to on time, sometimes early. And I know the fans are very happy; the people that come to the show are much happier about that."

GUNS N' ROSES does not have any tour dates on its schedule at the moment. The group's last album and first in 15 years, "Chinese Democracy", came out in 2008.