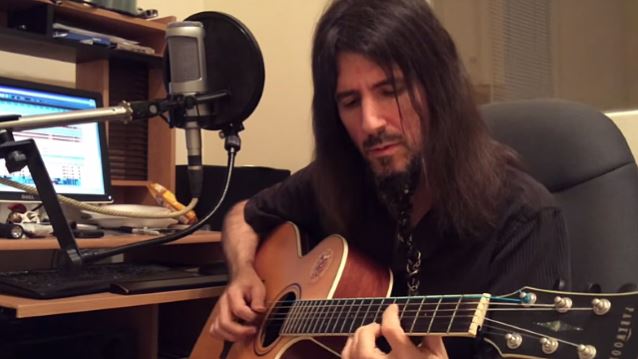 GUNS N' ROSES guitarist Ron "Bumblefoot" Thal recently revealed that he was focusing on his solo career after spending eight years playing in the Axl Rose-fronted band. Thal, however, stopped short of saying that he was no longer a member of GUNS N' ROSES, which has caused some fans to criticize him for not coming clean about where he stands with the group.

Asked by journalist Gary Graff to clarify his status with GUNS N' ROSES, Thal said: "That is the thing I am not to elaborate on. I think there's enough clues out there for you to figure out what I'm up to now."

He continued: "I'm a real busy guy and really enjoying everything I'm doing, and I think that everything I'm doing has a future and a bigger plan — the solo stuff, the other bands, the producing, the charity and educational things I'm doing. These are all the things I love that I've really missed, and I'm very happy to be putting my time back into that. It's really what I should be doing."

Bumblefoot joined GUNS N' ROSES in early 2006 as the replacement for Buckethead. He made his live debut with the band at the Hammerstein Ballroom in New York City on May 12, 2006.

Back in 2013, Bumblefoot expressed his frustration over the fact that GUNS N' ROSES had not made any new music since the release of 2008's "Chinese Democracy". He said: "If something came out at this point, it would be very old material that is just being released now. So it would be unheard material, but to me, I don't consider that a new record, I consider that just releasing old material from a band that doesn't exist anymore. And we need to make an album of this band right now." He added: "I'm all about making music; that's why I make music — to make music. So I'd like to really do that. I would be very happy if GUNS N' ROSES could do that…. I wanna make some music with these motherfuckers. It's a damn good band and we should really have the opportunity to give what we can to all [the fans], and make some music for [the fans]."

Bumblefoot released a new solo album, "Little Brother Is Watching", in February. The disc was composed, produced, recorded, mixed and mastered by Bumblefoot at his studio in New Jersey, and also features drummer Dennis Leeflang.

Another GUNS N' ROSES guitarist, D.J. Ashba, issued a statement on Monday (July 27) saying that he was leaving GUNS N' ROSES. His statement read in part, "It is with a very heavy heart and yet great pride that I announce that I've decided to close this chapter of my life and encapsulate the wonderful times that I've shared with GUNS N' ROSES into fond memories. I have reached a point in my life where I feel its time to dedicate myself to my band SIXX: A.M., my adoring wife and family, and to the many new adventures that the future holds for me."

Ashba added: "I want to take a moment to thank Axl from the bottom of my heart for not only the most incredible experience of my life, but for truly believing in me. You are a true friend and a champion of mine and I am forever grateful. And even as I move on to pursue other endeavors, I will always remain one of your biggest fans. I also would like to thank each and every one of you fans for your love and support throughout the years."