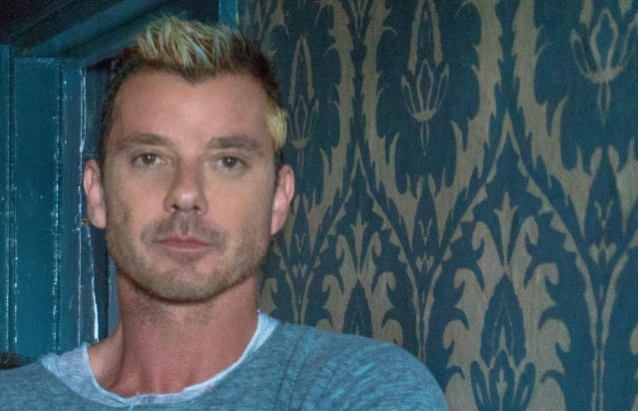 BUSH frontman Gavin Rossdale spoke to The Smoky Mountain News about the upcoming 25th anniversary of the band's debut LP, 1994's "Sixteen Stone". Asked how the album has stood the test of time for him, Gavin said (hear audio below): "People sometimes talk about lyrics being too fragmented. And the weird thing is that I never liked to be that specific in a certain way, and one of the reasons was I always liked the lifespan of a song and to not have it nailed down to a time and a place gives it the ability to have its own journey. And the weird thing about those songs is that I can sing any single one of them — and I often do sing those at night — and the lyrics are completely present day, because I'm singing them present day. I don't sit and reflect on where it was and what it was and why it was. There's enough venom in me to focus on where I'm at now and what things could be that are satisfying now or inspiring and endearing and things I'm excited about. But it's very present day for me. It's been a weird journey that they live with me all the time."

Rossdale went on to say that his songs take on a "different meaning" all the time. "Every single song that's made in history, you can fucking tell me it's about a tree, but as soon as it's out in the public and someone else decides it's about something else, it's no longer about a tree," he said. "That it's about a tree for you is completely subjective. So that's the most powerful thing about music — it's just transferrable for every single person listening. There's no ban on anyone. So therefore, it's the same if you sing it with a 20-year gap. Clearly you can't be thinking about the same thing. So that's how it is. It's very natural."

"Black And White Rainbows" was crafted after Rossdale went through a divorce with pop star/reality TV judge Gwen Stefani in 2015.

A remastered version of "Black And White Rainbows" was made available in the fall of 2017 with bonus tracks.