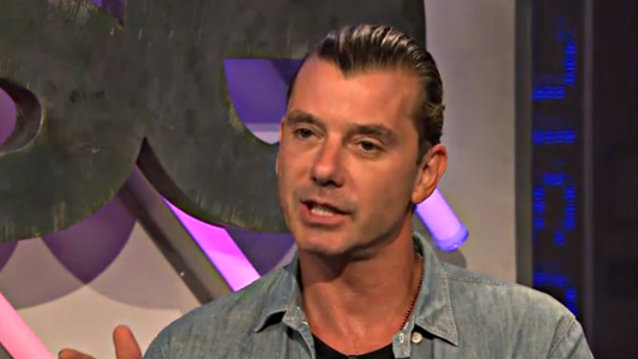 Fuse recently spoke to BUSH frontman Gavin Rossdale about the band's new album, "Man On The Run". You can now watch a clip from the chat below.

BUSH has released the official video for "The Only Way Out", the first single from "Man On The Run". BUSH recorded the album at Studio 606, the private studio owned by FOO FIGHTERS frontman Dave Grohl. The Pulse Of Radio asked Rossdale if Grohl ever dropped by or sat in on a session. "No, he didn't sit in with us, but he is incredibly kind," he said. "He's a good friend and you know, it's a private studio so to let us come in there is quite a, is an incredible gesture. We benefited greatly from it because the studio sounds great, it's just a great place to be and very kind of Dave."

The video itself is shot in reverse, only to flip halfway through and end in the same place it started. It features Rossdale carrying a TV on which the image of him sings the song, while chaos reigns around him.

"Man On The Run", BUSH's sixth studio set, is due out on October 21. It follows up BUSH's 2011 comeback effort, "The Sea Of Memories", which was the first all-new BUSH album in a decade.

Fans can catch Rossdale serving as a guest mentor, alongside his wife Gwen Stefani, on the October 13 episode of the NBC talent search show "The Voice".