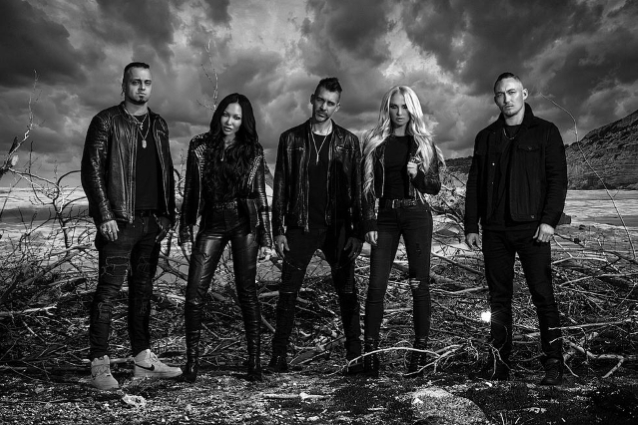 BUTCHER BABIES Are Not Offended By 'Female-Fronted' Label: 'We Have A Club'

In a new interview with Heavy New York, Heidi Shepherd and Carla Harvey of BUTCHER BABIES' discussed whether they feel the term "female-fronted," which is used to lump together disparate bands based on the presence of a female vocalist or frontperson, is empowering or restrictive. Carla said (as transcribed by BLABBERMOUTH.NET): "I think it discounts the men in the band. Just because you have a female vocalist doesn't mean you're a female metal band. But it is what it is. And if it brings someone in the door and they find our music because of that, then whatever."

Added Heidi: "You're absolutely right about that, Carla. That's something that always bugs me, because Henry [Flury, BUTCHER BABIES guitarist and Heidi's boyfriend] is one of the very few good eight-string guitar players in metal at all — in any genre, really. And he doesn't really get that recognition that he deserves because people are so focused on, 'Oh, it's female-fronted.'"

She continued: "I don't necessarily hate the term — I don't really care anymore. When we first started, of course, we were, like, 'Don't say that.' Now I don't look at it as a negative thing; I look at it as this is, and has been, a movement that we've been a part of for 12 years now. So I'm not looking at this kind of offended that people would say 'female-fronted.' To me, like I said, it's a movement. So, that's fine. We sound different than DOROTHY. DOROTHY sounds different than ARCH ENEMY and all these girls that are in the industry. Even though we sound different, we have created this little girls' club where we support each other. Even the female guitar player Nita Strauss, she said something to me one time that really hit me hard was, 'Queens straighten each other's crowns.' And I'll never forget that, because that's the reality of how it's been for us our entire careers. We've all gotten along with the girls in the bands and always been the supportive ones cheering each other on. And that's a beautiful thing. So I'm not offended by the term 'female-fronted,' because I look at it as such a positive thing. We have a club. We all sound different, but we have a club, and we support each other."

Last month, BUTCHER BABIES announced a headlining tour, "Butcher Babies Vs. Goliath", which will feature the band performing its debut album, "Goliath" — released in 2013 via Century Media Records — in its entirety along with recent hit singles and new material. The tour will stretch from August 28 to October 8 and will see the group stop at several of the largest U.S. rock festivals, including Rocklahoma, Louder Than Life, Aftershock and more. Shepherd and Harvey will continue to showcase fellow leading ladies by enlisting support from female-fronted acts INFECTED RAIN and STITCHED UP HEART. KALEIDO will also appear on select dates.

Hailing from the City of Angels, BUTCHER BABIES have released two EPs and three albums to date, with their latest 2017 LP, "Lilith", debuting at #1 on iTunes Metal chart and #7 on iTunes Rock chart. The band kicked off 2021 by independently releasing a handful of newly energized singles produced and co-written by Matt Good (FROM FIRST TO LAST),including the most recent track "Last Dance" in April. Along with previously released singles "Yorktown", "Sleeping With The Enemy" and "Bottom Of A Bottle", all are to be featured on their upcoming self-released EP.