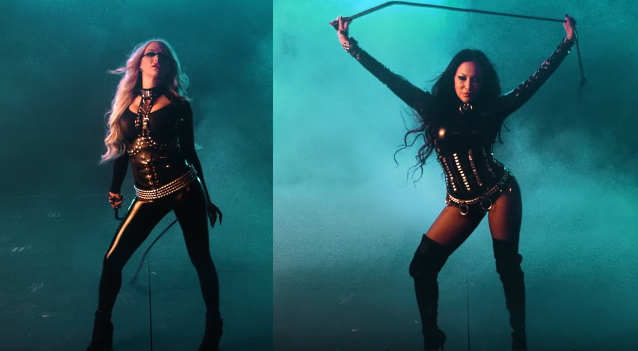 Heidi Shepherd and Carla Harvey have once again said that they have no regrets about the period in BUTCHER BABIES' history when they used to perform topless with tape over their nipples, explaining that it was meant as an ode to PLASMATICS frontwoman Wendy O. Williams, who had a song called "Butcher Baby".

Asked in a new interview with Rocking With Jam Man if they regret the nipple-tape look, Carla responded (as transcribed by BLABBERMOUTH.NET): "No. It had a meaning, and it was a snapshot in time. When we started playing music together, we were just two friends. We used to be in a cover band together. And let me tell you, the early shows that we played together were so crazy and so incredible — real punk rock. We would be covered in blood and feathers and have the tape on our nipples. Honestly, we wanted to tour and all that, but we didn't know that we would be an internationally touring band with young kids coming to shows. So we didn't think about stuff like that. Our intentions were very pure — we just wanted to go out there and have a great time with our friends and put on an amazing show… It's a snapshot in time, like I said. I don't regret a thing about it."

Added Heidi: "I don't know if you're familiar with Wendy O. Williams, but she's the first female in rock and metal who really went out there and she told everyone, 'Hey, you know what? You can't tell me what to look like. You can't tell me what to sound like. You can't tell me the music I'm supposed to make. I'm gonna go out there and I'm gonna do it for myself.' She went out there with a full-on intention of fucking shit up. That's what she did. One of her singles that we used to cover was called 'Butcher Baby', so that's where the name comes from. She also used to wear that attire. So that's where the look came from, the attitude — everything. And it's not lost on me that people didn't get that correlation, but that's okay, 'cause we did. And to us, we lived in that memory of Wendy O. She basically crawled so we could run. So we don't regret that at all. I wouldn't do it now. I'm old. [Laughs]"

Heidi previously addressed the nipple-tape issue in a 2018 interview with the "Talk Toomey" podcast. At the time, she said that BUTCHER BABIES' early image wasn't meant as a clever marketing ploy designed to ensure maximum exposure. "That was not ever anything that ever went through my mind: 'Oh, this will help us get attention.' Because I was in a band for a year prior to that, that I did that," she explained. "I didn't think that it would ever end up here. I didn't think that it would ever amount to anything. I just thought we were gonna have some fun playing some original music with our friends along the Sunset Strip, 'cause that's what we did before. The only difference was, before, it was five girls and [we were playing] covers. And that's the reason we created BUTCHER BABIES — to do original stuff."

Hailing from the City of Angels, BUTCHER BABIES have released two EPs and three albums to date, with their latest 2017 LP, "Lilith", debuting at #1 on iTunes Metal chart and #7 on iTunes Rock chart. The band kicked off 2021 by independently releasing a handful of newly energized singles produced and co-written by Matt Good (FROM FIRST TO LAST),including the most recent track "Last Dance" in April. Along with previously released singles "Yorktown", "Sleeping With The Enemy" and "Bottom Of A Bottle", all are to be featured on their upcoming self-released EP. Stay tuned for details in the coming months.