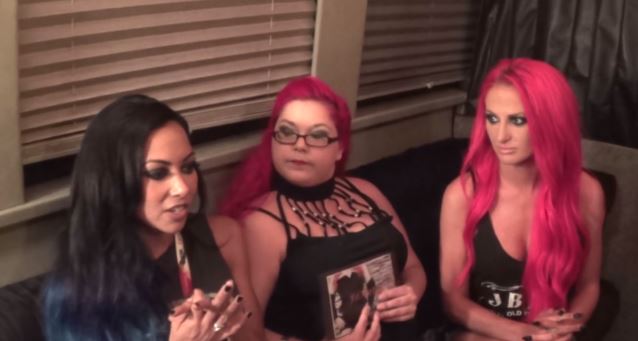 Speaking about the title of BUTCHER BABIES' second album, "Take It Like A Man", Carla said: "The title of the album comes from a lyric in our song 'Dead Man Walking', which was a very powerful for Heidi and I to write, because we spoke about the way that we were raised in that song. And one of the lyrics in that song is, 'Where were you when I learned to take it like a man? Where were you when I learned to stand?' It was just a standout lyric and we thought that… We kept thinking about it and it just kept coming back into our heads."

She continued: "It has so many different meanings for us. In this industry, we've had to ignore so much, I guess, hate, for lack of a better word. And, really, I just learned to take it like a man and keep doing what we're doing. In our lives in general, we've had to do that throughout our whole lives. And it's not a gender-based thing. There comes a point in everybody's life when you have to just, you know, take it like a man… whatever you're going through in your life."

Added Heidi: "It's more of a term than gender-based, for us. In the song 'Dead Man Walking', you can actually… It talks about the exact moment in my life where I had to learn how to fight and take it like a man and stand for myself. And that moment in my life, I think, defined who I am today. These moments in our lives defined the women that we are and then becoming an independent, powerful — if you will — woman. And as Carla stated, it's something that lot of people will learn, a lot of people will go through in their lives. And it's more just a term of fighting — fighting for yourself, fighting for your life."

Asked about the reports that BUTCHER BABIES had to fight their record label and management to get their support in using the "Take It Like A Man" title for the new album, Carla said: "You know, that kind of got blown out of proportion. Our management asked us to really think about what we wanted to call our album. The sophomore album is a very important one, and they wanted to make sure the name wasn't just an arbitrary name, that it really meant something to us. And after we explained how we felt about the title that we chose, they completely got it and were behind it a hundred percent."

Added Heidi: "They are always really, really great to us and they have let us do whatever we wanna do. It's their job to be, like, 'All right, now think twice' — about everything, about everything we do, whether it's artwork or a song or anything. They're there to tell you to think twice. So, as Carla said, when we told them, they were behind us one hundred percent."

"Take It Like A Man" was released on August 21 via Century Media. The CD was produced by Logan Mader, who has previously worked with FIVE FINGER DEATH PUNCH, DEVILDRIVER, CAVALERA CONSPIRACY and GOJIRA.