BUTCHER BABIES are excited to return to the road this fall as they have announced a headlining tour, "Butcher Babies Vs. Goliath", which will feature the high-octane band performing their critically acclaimed debut album, "Goliath" — released in 2013 via Century Media Records — in its entirety along with recent hit singles and new material. The tour will stretch from August 28 to October 8 and will see the female-led band stop at several of the largest U.S. rock festivals, including Rocklahoma, Louder Than Life, Aftershock and more. Frontwomen Heidi Shepherd and Carla Harvey will continue to showcase fellow leading ladies by enlisting support from female-fronted acts INFECTED RAIN and STITCHED UP HEART. KALEIDO will also appear on select dates. Tickets will go on sale this Friday, July 16 at 10:00 a.m. (local time) at www.butcherbabies.com. Dates can be found in the admat pictured below.

"Blasting back into the realm of live music iss already the thing that I am most excited about in life," exclaims Shepherd. "Adding in playing our debut album 'Goliath' every night on top of that makes this one of our most explosive tours to date. I'm especially excited to bring our friends in INFECTED RAIN and STITCHED UP HEART along for the ride. This will without a doubt be a do-not-miss tour with some of the fiercest ladies in metal!"

"After almost a year and a half of dark stages, we are so thrilled to be going back out on the road," shares Harvey. "I cannot wait for that first electric moment in front of a live crowd again, celebrating the return of music together! I expect lots of happy tears in the mosh pit on this run. Making the return even sweeter, we're bringing along some of our favorite women in metal. This is our first female-fronted tour package in the United States, a display of girl power at its finest!"

"We can't wait to unleash 'Goliath' in the stage," says guitarist Henry Flury. "Beware kids…we've been hibernating. On a scale of 1 to melted faces, get ready to receive an 11."

For over a decade, BUTCHER BABIES have been crushing stages worldwide with their vicious live performance and explosive energy. Their stage presence is a hypnotic spectacle that leaves audiences hungry for more as they’ve displayed on tours among the likes of MEGADETH, ROB ZOMBIE, MARILYN MANSON, FIVE FINGER DEATH PUNCH, DANZIG, IN THIS MOMENT, HOLLYWOOD UNDEAD, CRADLE OF FILTH, BLACK LABEL SOCIETY and many more.

Hailing from the City of Angels, BUTCHER BABIES aided in the jubilant revival of the metal scene on L.A.'s iconic Sunset Strip, landing the band a record deal with Century Media Records. The group has released two EPS and three albums to date, with their latest 2017 LP, "Lilith", debuting at #1 on iTunes Metal chart and #7 on iTunes Rock chart. The band kicked off 2021 by independently releasing a handful of newly energized singles produced and co-written by Matt Good (FROM FIRST TO LAST),including the most recent track "Last Dance" in April. Along with previously released singles "Yorktown", "Sleeping With The Enemy" and "Bottom Of A Bottle", all are to be featured on their upcoming self-released EP. Stay tuned for details in the coming months.

* Festival
^ No STITCHED UP HEART
+ With KALEIDO 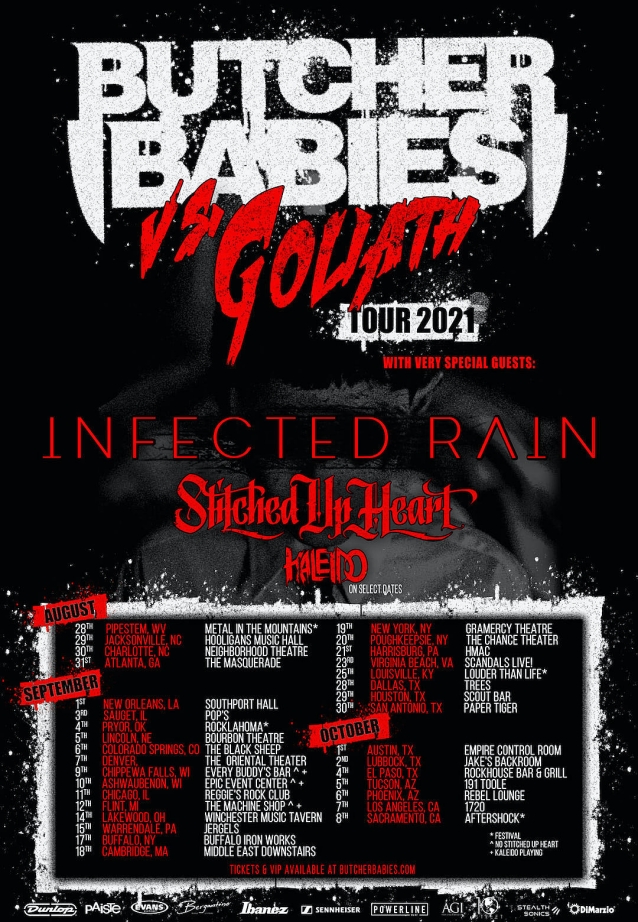