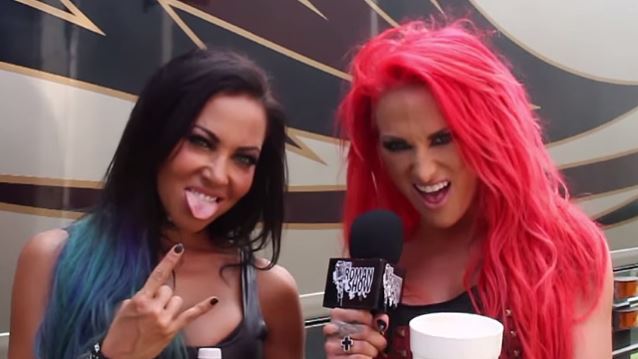 On April 25, "The Roman Show" (web site) conducted an interview with BUTCHER BABIES frontwomen Heidi Shepherd and Carla Harvey at this year's Fort Rock festival at JetBlue Park in Fort Myers, Florida. You can now watch the chat below.

Asked about what fans can expect from BUTCHER BABIES' forthcoming follow-up to 2013's "Goliath" debut album, Heidi said: "We're ve been a band for over five years now. When we first started, we initially were thrash metal — all screaming, in your face, just really thrashy — and then when we recorded 'Goliath', you know, four years later or something… no, three yeas later… something like that… we kind of made it a little bit more melodic, a little something that showed the talent of the band. 'Cause a lot of people were, like, 'Oh, they're not a real band.' 'Cause we were around forever before we were able to release an album. So we really wanted to go out there and show our talents in it. This album, we gained a fan base, and we know what they love. We know that when we go to these festivals and when we go to these shows, our thrashier music just grabs the crowd and pulls them in. So we wrote this album with that in mind and went back to our roots — the thrashiness, the heaviness, a lot of emotion [and] a lot of aggression. And we're really excited. We played two new songs tonight, and it was… great response for both of them."

Added Carla: "The one thing that we've always said… we've always said that metalheads can sense honesty and they relate to honesty. So all of our lyrics are taken from deep in our guts. They're mostly personal experiences. We have a few songs that are about serial killers and this and that, but most of the songs are straight from our hearts, straight from personal experience, our childhoods, things that have happened to us as we grew and became adults and strong women. And we never hold back; they're very raw lyrics."

She continued: "Most of this album was written towards the end of last year. We wrote a lot in the studio, which is a completely different experience for us. The other songs, in our past, we had the luxury of playing those songs live for a long time before we recorded them. This is kind of a new experience for us. We wrote them partially on our headlining tour, partially in the studio, and recorded them without ever playing them live first. But, you know, we had the emotion there, so they still came out great. We're really proud."

Said Heidi: "One thing we always say is that writing these songs, for us, is a very therapeutic, cathartic experience. I think for any songwriter, that's how it is. You take negative experiences in your life and you turn them into positives through music. We encourage that for anyone — whether it's writing music or art or anything — there's so many ways to direct your passion and to direct your emotions. We took all these weird experiences — negative, semi-negative, maybe even positive emotions from our past — and made them into huge positives through the music, and that's something we will always stand by and always live for."

She continued: "Carla and I both got emotional so many times in this album, the recording of the album. I remember one time, the producer… I was in the vocal booth, and he didn't know I was just bawling my eyes out, and he kept trying to get me to record more. And I was, like, 'I can't. I need, like, an hour.' [Laughs] But… We write from emotion, and I think a lot of people will be able to relate to that."

Carla concurred: "We've changed so much as people the last five years that this band has been together, because we were able to let out so much of our anger and frustrations through our music. We always talk about how, when we first started this band, we never smiled on stage. And now, when we're up there, the whole time we're smiling… we have these big grins on our faces the whole time, because we've gotten through so much together by letting go of that negativity through the songs that we write together, and it's been such an incredible ride."

BUTCHER BABIES' sophomore album will be released at the end of the summer via Century Media. The CD was produced by Logan Mader, who has previously worked with FIVE FINGER DEATH PUNCH, DEVILDRIVER, CAVALERA CONSPIRACY and GOJIRA.