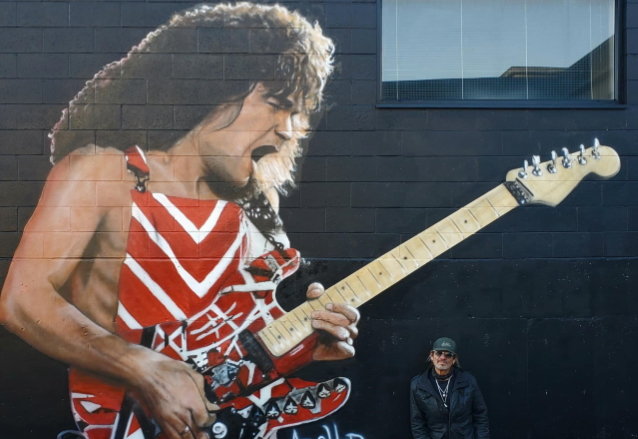 An artist in Canada has paid tribute to legendary VAN HALEN guitarist Eddie Van Halen with a mural.

Airbrush artist Paul Archer painted the mural on the back wall of Archer Airbrushing shop in Victoria, British Columbia.

Archer, who was a huge fan of VAN HALEN and got to know members of the band on a personal level, completed the piece in two days.

"I was a stagehand at the Memorial Arena, [now known as the Save-on-Foods Memorial Arena], and we actually went to lunch together and had fish and chips," Archer told CTV News. "We talked and he became kind of like a friend because every time VAN HALEN would play, I would be at the show and I'd be a stagehand and he'd know me by name."

Archer went on to say that he originally intended to make the mural three times larger but was forced to abandon that plan after failing to find a suitable location.

Paul posted a pictiure of the mural on his shop's Facebook page, and he included the following message: "RIP Eddie Van Halen. Everyone said it couldn't happen, so I painted him on my building downtown! Light up the Sky! Vanhalen #archerpaintingoftheday #EddieVanHalenMural #vanhalen #EdwardVanHalen #WolfGangVanHalen".

RIP Eddie Van Halen
Everyone said it couldn't happen, so I painted him on my building downtown!
Light up the...

After your visit to Miniature World in Victoria, be sure to check out this Eddie Van Halen mural painted by Paul Archer. - Jeremy https://t.co/An3BcxxwE9