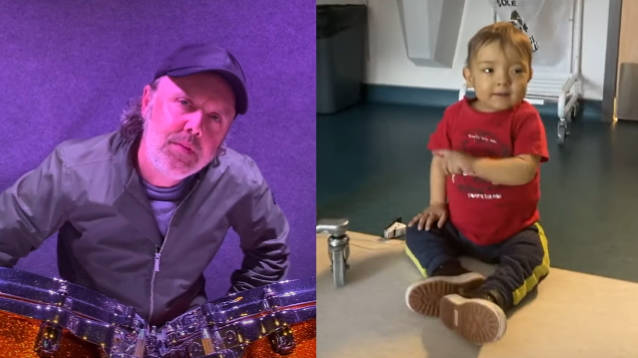 According to Global News, Lars Ulrich took part in a virtual meeting with a two-year Canadian METALLICA fan who is suffering from a rare type of cancer.

Last Thursday, Milan Rossignol, who will turn three in August, got a call from the METALLICA drummer after doctors at the Montreal Children's Hospital launched a successful Twitter campaign requesting a meeting with the band. Rossignol is a patient in the hospital's intensive care unit where he's been receiving chemotherapy treatments.

Although Milan is unable to express himself verbally because he is afflicted with a severe form of Langerhans cell histiocytosis, his face "lights up" whenever METALLICA's videos are playing on the computer," Dr. Sharon Abish, a pediatric oncologist at the Montreal Children's Hospital, told Global News.

"He doesn't speak but he has a way of communicating his desires, things he's happy about, things he's not happy about," Abish said. "He gets so excited every time METALLICA gets on the screen and dad and him just rock and roll and they just have a great time."

During the virtual meeting, Ulrich spoke to Milan and his parents, Yannick Rossignol and Catherine Perreault, as well as Milan's siblings.

"Milan make a big smile when he realized that Lars [was speaking] to him," said Yannick Rossignol. "To see him like this with a beautiful smile for us, it's very amazing."

Earlier today, Lars took to his Instagram to write: "Grateful to have one of our youngest fans, 2-year-old Milan, his mom Catherine, dad Yannick and siblings Coralie and Loïc as part of the METALLICA Family.

"So touched that our music makes a difference through these challenging times for all of you.

"Loved connecting via Zoom - sending much love to you all as well as Dr. Goloff and your medical team from here in San Francisco."