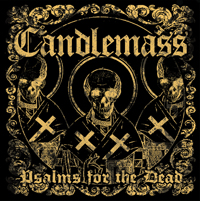 Legendary Swedish doom metallers CANDLEMASS will release their 11th and final album, "Psalms For The Dead", in June via Napalm Records. A limited-edition seven-inch vinyl single contaning two album tracks —"Dancing In The Temple Of The Mad Queen Bee" and "The Killing Of The Sun" — will precede the full-length effort on April 13.

"This record represents everything that is CANDLEMASS," the band's bassist and main songwriter Leif Edling states. "It is big, fat, epic and heavy, and it’s also metal as fuck! We couldn't have done a better album! It's our last one and we put just all we had into it. 'Psalms For The Dead' is an album about the presence and absence of time, false prophets and inner demons....hymns, regret and farewell. Let there be doom!"

Other songtitles set to appear on the effort include "Prophet", "Sadness Run Deep" and "Water Witch".

Check out the cover artwork for the album and the single below.

Despite the fact that "Psalms For The Dead" is being billed as CANDLEMASS' final studio album, Edling told Terrorizer magazine in a recent interview that the group is not planning on hanging it up anytime soon.

"We're not splitting up," he said. "Yes, this is to be our last album, but we don't plan to disappear from the scene for quite awhile. We will tour this year, hopefully the next one as well, and then there's our upcoming 30th anniversary. So plenty more doom to come! It's just that we want to stop before we get too old and start putting out half-lame albums. Instead, we'll slowly fade away into the sunset with our dignity intact. We're not young anymore. Actually, some of the stuff I've been writing for this album ism in fact, about saying goodbye. It's a bit psalm-like in parts and has got a big epic vibe."

He added, "I have got a very good feeling about this album. It's so metal, so heavy, so doomy, so epic.. It's fucking colossal! I think this will turn out as good as [2009's] 'Death Magic Doom', something I thought would be impossible."

CANDLEMASS celebrated its 25-year anniversary by performing an extra-long, two-and-a-half-hour set at Debaser Medis in Stockholm on December 18, 2010. The band's classic debut album, "Epicus Doomicus Metalicus", was played in its entirety for the first time with the original singer Johan Längqvist.

CANDLEMASS released a new DVD, "Ashes To Ashes - Live", in North America on June 29, 2010 via Nuclear Blast Records (April 23, 2010 in Europe). The set contains footage of the band's performance at Sweden Rock Festival in front of 30,000 people as well as CANDLEMASS' entire October 2009 concert in Athens, Greece. It also includes a 30-minute interview and two photo galleries. The DVD was released as a CD+DVD, with the Sweden Rock show as the audio CD.

"Death Magic Doom", the last album from CANDLEMASS, debuted at No. 79 on the Top New Artist Albums (Heatseekers) chart, which lists the best-selling albums by new and developing artists, defined as those who have never appeared in the Top 100 of The Billboard 200.