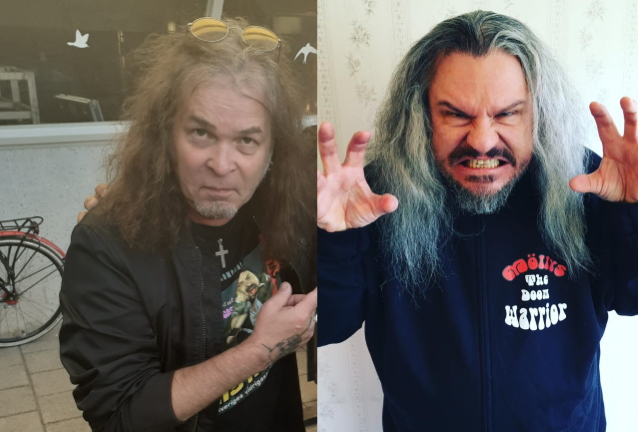 Messiah told BLABBERMOUTH.NET: "It's the first time in 16 years me and my old friend Mats Mappe Björkman from CANDLEMASS [were] together on the same stage. We are both old ANVIL fans since being teenagers. Since we are friends with ANVIL they invited us up on stage and it was great fun!"

In a recent interview with BLABBERMOUTH.NET, Björkman shared how his appearance with Marcolin and ANVIL came together. "It was fantastic," he said. "People think we are cat and dog, but we are not. We don't work together in CANDLEMASS anymore, but we still go out sometimes to have a beer. Me, Messiah and Leif [Edling, bass], we are good friends. And CANDLEMASS is good friends with ANVIL. I have tons of respect for them. I never do guest performances. The thing was that [frontman Steve] Lips [Kudlow] texted the morning when they came to Stockholm and asked me if I could do a guest performance with them and Messiah. I was like, 'Yeah! But I haven't rehearsed the song ['Metal On Metal'].' I knew the song. It's a very easy song to play. I said, 'If you want it, I'll take it.' I texted Messiah and said, 'You know we are invited to do this with ANVIL? Should we do it?' He said, 'Yeah, of course!' I said, 'If you do it, I'll do it.

"We understood there will be lots of things on Blabbermouth," he laughed. "It's going to be like, 'What the fuck is going on?' That was something we thought would be very fun. That was the reason we did it to [show] that we are friends and we can do things together, even if we don't do CANDLEMASS together. I think it was a good statement."

Björkman was then asked whether there would be future opportunities for Marcolin to guest with CANDLEMASS, who hasn't performed with the band for more than a decade and a half. "Johan [Längqvist] is the proper singer now," he said. "The circle is closed, that's for sure. That's where it is — no doubt about that. The circle is closed. That's the thing I wanted for many, many years. He's going to be the proper singer for CANDLEMASS until we close CANDLEMASS. But, to answer your question, if we would have an anniversary with 'Nightfall' and he [Marcolin] could be doing that album, that's an open door. Of course, it is. It's the same with him. I understand Messiah — he doesn't want to be doing one song with CANDLEMASS. He's said the same thing to me: 'Johan is the proper singer now. I'm not going back to CANDLEMASS to be the singer.' It would have to be an event, an anniversary for an album. That door is open. It's not closed, no way. But Johan is still the proper singer of CANDLEMASS, so no one is going to think we're going to take Johan out of the band for Messiah. Johan knows it. He's said the same thing. We're still family. I wouldn't have anything against seeing Messiah do 'Nightfall'."

Marcolin exited CANDLEMASS for the presumably final time in 2006, one year after the release of the band's self-titled album. He was later replaced by Robert Lowe (SOLITUDE AETURNUS),who sang on the band's "King Of The Grey Islands" (2007),"Death Magic Doom" (2009) and "Psalms For The Dead" (2012) LPs. CANDLEMASS's frontman between 2012 and 2018 was Mats Levén, who previously recorded and toured with YNGWIE MALMSTEEN and THERION. Four years ago, CANDLEMASS fired Levén and rehired Johan Längqvist. Längqvist sang on CANDLEMASS's debut album, 1986's "Epicus Doomicus Metallicus", before exiting the group and being replaced by Marcolin.

Tonight was a UNIQUE evening when Mappe and Messiah from Candlemass did a guest apperance with the legendary Anvil! 🔥🤘🏼...