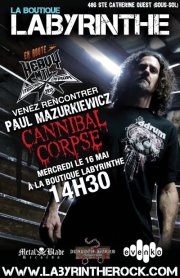 CANNIBAL CORPSE drummer Paul Mazurkiewicz will take part in a meet-and-greet on Wednesday, May 16 at Boutique Labryinthe in Montreal, Quebec, Canada from 2:30 p.m. to 3:30 p.m.

As previously reported, Mazurkiewicz will serve as a special guest judge for Round 5 of Heavy MTL's "Battle Of The Bands" where the heaviest and loudest bands in Montreal, Quebec, Canada compete for a chance to win one of two prized spots on the Heavy MTL 2012 lineup at Parc Jean-Drapeau from August 11 to August 12.

Round 5 will take place at Les Katacombes (1635 St. Laurent) on Wednesday, May 16 with the following competing bands: BOOKAKEE, CROSSTITUITION, FIRST FRAGMENT and THROUGH DEATH for the death metal / grindcore night.