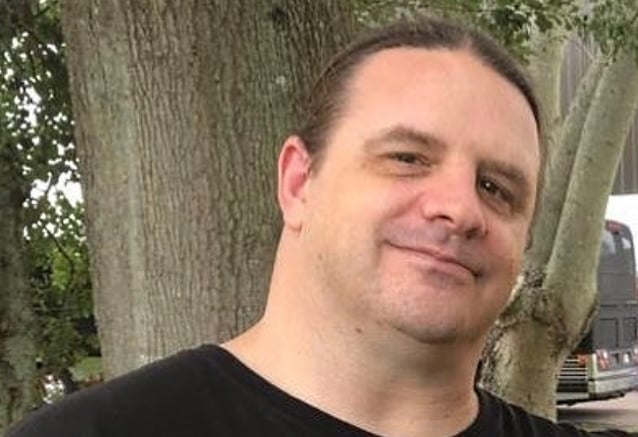 In a new interview with U.K.'s Kerrang! magazine, CANNIBAL CORPSE frontman George "Corpsegrinder" Fisher was asked if he thinks the Internet has an unhealthy interest in his neck. He responded: "Yes, a hundred percent. Everyone's always asking about my neck, and any person doing any neck exercises, I get tagged in it all the time. It's crazy. There was a meme, 'No Valentine this year, maybe necks year', which I thought was brilliant."

Fisher also talked about how SLAYER's Tom Araya ended up with a metal plate in his neck through constant headbanging. Asked if he ever worries about potential damage from windmilling, George said: "I've had pulled muscles in my shoulder but, knock on wood, I've never had a problem in my actual neck. My neck has gotten bigger over the years, and there's no doubt it's because of the headbanging. I must have been building muscle somehow with the way I do it, but it's just become second nature to me when we play shows. It's funny you mention Tom Araya because when we toured with SLAYER, that was a lifelong dream. I cornered Tom one night when I was drunk. He'd said in an interview that not being able to headbang kinda took the fun out of it for him, and that touched me. I had to tell him he was the main reason I headbang the way I do. His style is that side-to-side infinity shape, but it made me see headbanging like an artform."

Back in 2021, Fisher told U.K.'s Metal Hammer magazine that his neck got so big through "headbanging and lifting weights when I was younger. My dad had a business where he did painting, roofing and everything, so I'd work with him all day long," he said. "After that, we'd go to fishing spots to catch and eat all these fish. Then I'd jog over to my friend's house, who lived about a mile away, and we'd lift weights. If you compare old pictures from when I was on [CANNIBAL CORPSE's 1996 album] 'Vile' to now, it's obviously grown, and the only thing I've really done since is headbanging, which must be fairly similar to weightlifting."

Asked if he has ever had his neck measured, like if he had to get a tuxedo to go to a wedding or something, Fisher said: "Maybe when I got married in '98, but I don't remember and it's bigger now. If you really look at it, it's bigger than the base of my head or where my ears are. A friend of mine once said, 'You don't have a head. You're a neck with lips.' A lot of security guys will come up to me and complain about working out, but having skinny necks, and ask how I do it. I tell them to listen to [SLAYER's] 'Reign In Blood' and headbang the whole way through after working out."