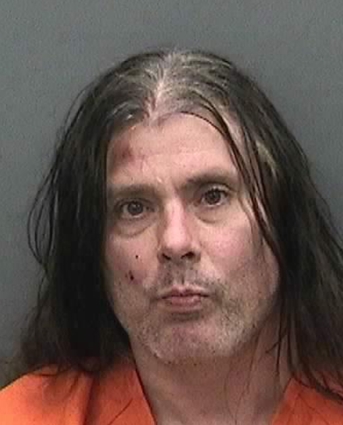 According to the Tampa, Florida television station WFTS-TV, CANNIBAL CORPSE guitarist Patrick "Pat" O'Brien has been arrested for breaking into a home and assaulting a police officer.

The 53-year-old musician reportedly entered a house in the 4700 block of Windflower Circle, near the Northdale Golf and Country, just before 7:00 p.m. on Monday (December 10) and ignored orders from the two people inside the home to leave. O'Brien didn't know anyone at the house and didn't have permission to be there, an arrest report states. A sheriff's office supervisor says O'Brien shoved a woman to the ground and then went into the backyard.

Deputies responding to the burglary found O'Brien hiding behind a fence near the house, which was less than half a mile from his own home. They say O'Brien "ran towards" one of the deputies "with a knife in his right hand." Deputies then shot O'Brien with a Taser and arrested him.

O'Brien is charged with burglary of an occupied dwelling with assault and aggravated assault on a law enforcement officer. His bond was set at $50,000.

Just as O'Brien was arrested, a massive fire broke out at his home in the 16000 block of Norwood Drive with exploding ammunition inside. Witnesses said there was a fight — apparently some kind of domestic dispute — at the house before the fire broke out. Hillsborough County firefighters were able to get the fire under control after about an hour but struggled due to the ammunition inside exploding due to the flames.

"They got about halfway through when the flames got too strong and they were hearing the pops and crackles of ammunition, so they had to take a defensive posture," Hillsborough County Fire Rescue spokesman Eric Seidel told the Tampa Bay Times.

Crews remained at the scene throughout the night and kept the road blocked long off after the fire was put out. It's unclear if anyone was home at the time, but no injuries were reported.

Officials say two military-style flamethrowers inside the home, making the fire much harder to battle for firefighters.

The Bureau of Alcohol, Tobacco, Firearms and Explosives (ATF) is investigating the house fire.

CANNIBAL CORPSE announced Monday that it would be part of the next North American leg of SLAYER's farewell tour.