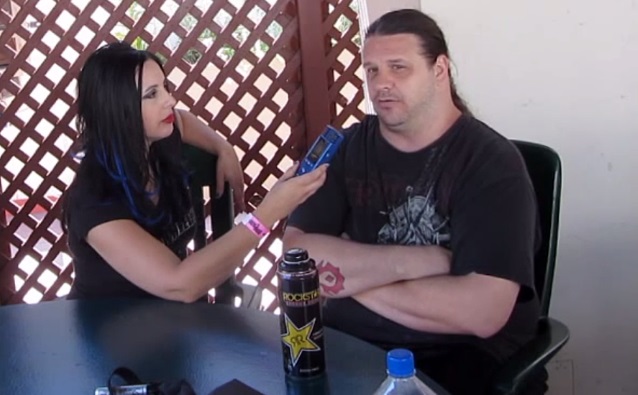 CANNIBAL CORPSE's GEORGE 'CORPSEGRINDER' FISHER Talks To 107.7 THE BONE About 'World Of Warcraft'

"Metal Zone" host Nikki Blakk of the San Francisco, California radio station 107.7 The Bone spoke with vocalist George "Corpsegrinder" Fisher of Florida death metal veterans CANNIBAL CORPSE at a recent stop of the Rockstar Energy Drink Mayhem Festival. While most of the conversation involved Fisher expressing his love for World Of Warcraft, he also talked to Nikki about touring, the recording process for new albums, what he's looking forward to at the Mayhem festival, and more. You can watch the chat below.

CANNIBAL CORPSE will release its new album, "A Skeletal Domain", on September 16 via Metal Blade Records.

"A Skeletal Domain" track listing for the CD is as follows: