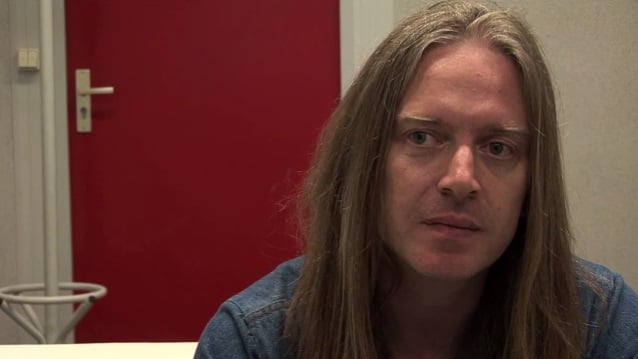 CARCASS' BILL STEER On Next Album: 'We Can't Repeat The Exact Same Recipe As' On 'Surgical Steel'

FaceCulture conducted an interview with guitarist Bill Steer of reactivated British extreme metal pioneers CARCASS on May 31 at the FortaRock festival in Nijmegen, The Netherlands . You can now watch the chat in two parts below.

Asked if there are any plans for CARCASS to do any songwriting for the follow-up to last year's "Surgical Steel" album, Steer said: "I wouldn't say there are plans, but we'd like to do some [songwriting]. It's just impossible at the moment, because we've got bookings right up until November. But I would say at some point we'll get together and start jamming on a few riffs and take it from there. We're not gonna rush anything, 'cause if we do a new record, it has to be valid. We can't repeat the exact same recipe as the last record. I mean, that was a fortunate thing. The riffs we had and Jeff's [Walker] vocals and the way we put it all together, it seems to have worked really well, that's great, but we can't do exactly the same thing again. And we're not the kind of people to plan and discuss and analyze too much, so we just have to get together in a rehearsal place, like we always do, and hack through all the available material and see what we come up with."

"Surgical Steel" sold around 8,500 copies in the United States in its first week of release to debut at position No. 41 on The Billboard 200 chart. The CD was released on September 16, 2013 in the U.K., September 13, 2013 in the rest of Europe and September 17, 2013 in North America via Nuclear Blast Records. The effort was produced by Colin Richardson (FEAR FACTORY, MACHINE HEAD, NAPALM DEATH, SLIPKNOT, BULLET FOR MY VALENTINE) and mixed by Andy Sneap (MEGADETH, ACCEPT, EXODUS, ARCH ENEMY).