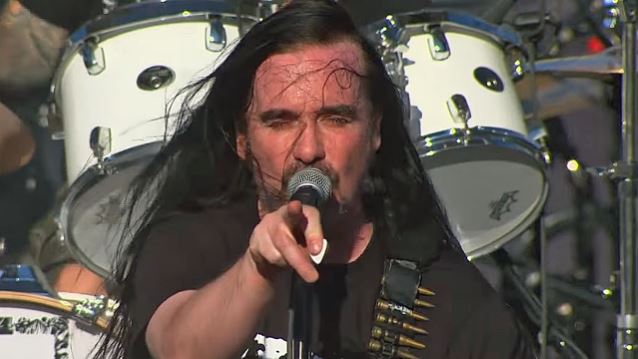 CARCASS Frontman JEFF WALKER: 'We're More Successful Than We Ever Were'

Bassist/vocalist Jeff Walker of British extreme metal veterans CARCASS was interviewed on a recent edition of the "Talk Toomey" podcast. You can now listen to the chat using the widget below. A couple of excerpts follow (transcribed by BLABBERMOUTH.NET).

On when fans can expect the follow-up to CARCASS's 2013 comeback album, "Surgical Steel":

Jeff: "Everyone keeps putting so much emphasis on us doing a new album, 'cause that's what the music business has become now. People release an album, they'll give it six months, and then the labels and the bands think that's it, the record's kind of sold its potential. But we haven't, as far as our album is concerned; it's still selling.

"Ultimately, are we a legacy act? I don't know. I mean, Earache just re-released our back catalog. And that's the thing — people keep talking in terms of 'Surgical Steel', we need another album, but we've got a back catalog, and there's a lot of people that have never heard CARCASS. So we're going out and we're playing to hopefully new people, like we did with the SLAYER tour, and we just went out with CROWBAR, and we're going out with DEAFHEAVEN.

"You know, we're trying to reach a new audience that's never heard the band. So, for them, 'Surgical Steel' and the other five albums, or whatever the hell it is, that's just new to them. So, yeah, we will eventually, I think, get around to doing a new album, but 'Surgical Steel' hasn't really run its course as of yet. I mean, we've just finally broken the forty-thousand album sales in the U.S., and that was kind of an ambition for me to do that. There's other bands who are our peers that sell more records, so there's still a potential [for us to move more copies]. Yeah, I mean, we've never been in a hurry anyway, 'cause there's always been gaps in between our albums, and this will be no exception. Yeah, we'll get around to it eventually."

On how the music business has changed for CARCASS compared to how it was back in the '90s:

Jeff: "Oh, it's great. It's rosy. I mean, we're more successful than we ever were back then. I mean, I think we sold more records back then… We did on Columbia, definitely, for a year, but… Yeah, we make a modest living from doing this. We're quite busy. We're reasonably happy. The crowds are good. It's just a lot better than it was back in the day. I mean, all the bands that were far more successful than us… You know, a lot of the musicians that are moaning nowadays about they're not selling records or they're making no money, these are people that are used to a certain standard of living. The thing is, I've always been poor, so I'm rich at the moment. [Laughs]"