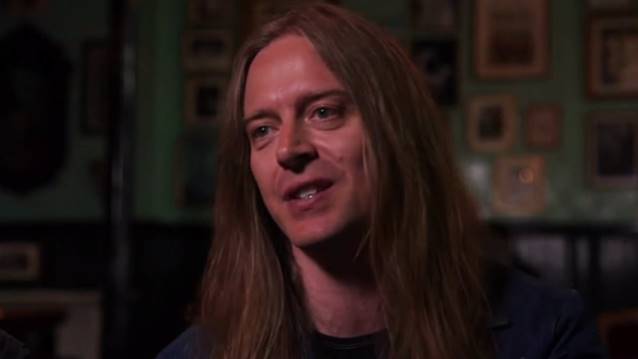 On whether he thinks there is something lacking with today's album productions in terms of bands relying too much on technology and albums missing some of the organic feel:

Steer: "Yeah, I would definitely go along with that, to be honest. It's hard to conclude otherwise, because I think the technology is making — not everybody, but a large number of musicians quite lazy. I'd rather hear human beings on albums. I want to hear the human elements. I'd like to get the feeling that I'm listening to a performance. I mean, obviously, when you do a record, you top things up, you craft it until you're happy with it; I get that. But it's almost like some people try to strip any kind of human elements in the record and get it to be absolutely perfect, which is just boring to me. When I hear tunes like that, which are blatantly click-track, everything's on the grid, the chorus has been copied and pasted all over the place, I just switch off; it's, like, there is nothing happening that makes me want to carry on listening. So I guess that's a big part of what's going on. It's a complicated subject that's being debated a lot right now, I guess."

On whether he has begun thinking ahead to CARCASS' follow-up to last year's "Surgical Steel" album:

Steer: "There's plenty of incentive there. Speaking for myself, I would love to do another record. I've heard Jeff [Walker, CARCASS bassist/vocalist] say similar things, and I know Dan [Wilding, drums] would love to. We're just gonna take it as it comes, really, 'cause, obviously, we're still some way into our touring schedule. We're not really gonna be done with that until… I don't know… towards the end of November, I think. So we can't realistically even look at new material until December. We'll take it from there. All I know is we would the next record to be very strong indeed, so as long as it takes, that's all I can say. Not that I am anticipating a long time in the studio, but we'll spend as long writing as we need to. You get very conscious of the passing of time, especially when you're at the age that Jeff and myself are at, so you don't wanna waste your time, or the audience's, with something that is mediocre."

"Surgical Steel" sold around 8,500 copies in the United States in its first week of release to debut at position No. 41 on The Billboard 200 chart. The CD was released on September 16, 2013 in the U.K., September 13, 2013 in the rest of Europe and September 17, 2013 in North America via Nuclear Blast Records. The effort was produced by Colin Richardson (FEAR FACTORY, MACHINE HEAD, NAPALM DEATH, SLIPKNOT, BULLET FOR MY VALENTINE) and mixed by Andy Sneap (MEGADETH, ACCEPT, EXODUS, ARCH ENEMY).