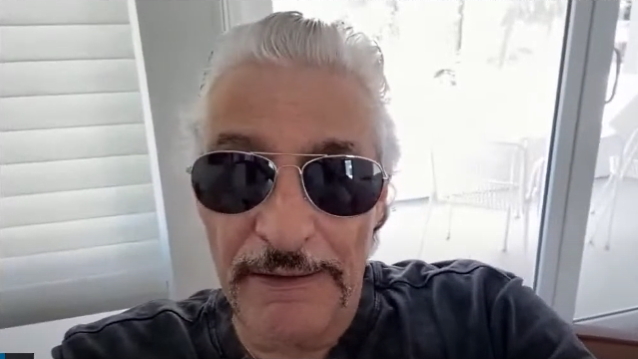 CARMINE APPICE Looks Back On His Appearance On HEAR 'N AID's 'Stars': 'That Was Fun'

In a recent interview with "The Five Count" radio show, legendary drummer Carmine Appice looked back on his involvement with "Stars", the 1985 charity single for famine relief released under the HEAR 'N AID banner.

On May 20 and May 21, 1985, 40 artists from the metal community gathered at A&M Records Studios in Hollywood, California to participate in the making of a record called "Stars" as a part of a very special fundraising project spearheaded by Ronnie James Dio. The "Stars" single and a video documentary on the making of the record was used to raise money for famine relief efforts in Africa and around the world. These 40 artists — including members of MÖTLEY CRÜE, JUDAS PRIEST, IRON MAIDEN, QUIET RIOT, TWISTED SISTER, BLUE ÖYSTER CULT and even SPINAL TAP — along with hundreds of other volunteers, donated their time and talent over four months to make HEAR 'N AID a reality. "Stars" was a plea for unity in the fight against world hunger.

Speaking about his experience recording "Stars", Appice told "The Five Count" (as transcribed by BLABBERMOUTH.NET): "That was fun. I was out on the road with KING KOBRA when Ronnie did that. 'Cause my brother [Vinny] played with Ronnie, Ronnie really had no family, especially when him and [his wife and manager] Wendy broke up. So Ronnie was always involved with coming to my family's Christmas parties and birthdays and Thanksgiving and all that stuff. So we were really close to Ronnie. So when Ronnie did that thing, they definitely requested that I be in it. I was on the road, so my brother Vinny cut the tracks with Frankie Banali [QUIET RIOT]. And then they flew me in, or I flew in — I think I flew in at my own expense; I was in the Midwest and I flew back to L.A. — and spent two or three days in the studio doing that. And at the time, 'We Are The World' was big, with Michael Jackson and all that stuff, so this was like the heavy metal version of 'We Are The World'. So I definitely wanted to be involved in it, 'cause I've always been involved in different charities and all that stuff. In 1983, when I got fired from Ozzy [Osbourne's band], one of the reasons I got fired was because I was doing masterclasses and getting a lot of press and Sharon [Osbourne, Ozzy's wife and manager] didn't like that. But those masterclasses, at the end of it, I gave fifty thousand dollars that year to UNICEF. I always like to be involved in charities and help people and all that. I [spent] one day flying out there, [another day] in the studio with them, doing that stuff, I sang on the background, I did an interview for the video, and then the next day I flew back. So it was three days. Luckily, I had off on those three days from playing gigs. But the rest of KING KOBRA was out on the road."

Due to contract differences with the labels, the "Stars" song and album weren't released until New Year's Day, 1986, and were only ever made available on vinyl and cassette. But Wendy Dio has said in recent years that she is continuing her efforts to correct that.

Wendy previously revealed that one of the reasons the HEAR 'N AID reissue was taking so long to come out was the "legal stuff" that needed to be taken care of. "You can always get the bands to do something, but it's the legal licensing of talking with the record labels they're on and the management and so on, to get something off the ground," she said. "So we're hoping to do that."