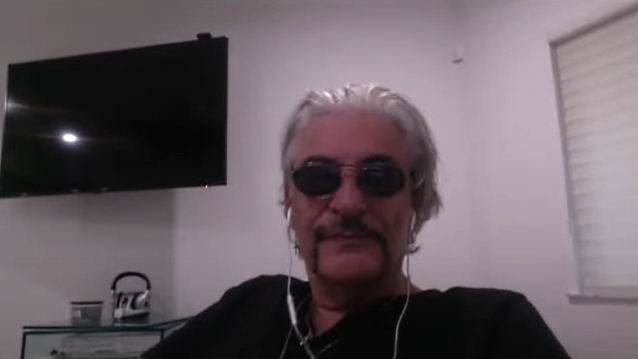 Carmine Appice says that he believes KISS can carry on without any original members.

Three years ago, the legendary rockers announced their second farewell tour, dubbed "End Of The Road", which is expected to last through the end of 2022. Joining founding members Paul Stanley and Gene Simmons in the band's current lineup are Tommy Thayer on guitar and Eric Singer on drums. Thayer and Singer are replacements for original members Ace Frehley and Peter Criss, respectively.

In a new interview with The Rock Experience With Mike Brunn, Carmine addressed the possibility of KISS one day existing without Stanley and Simmons, saying: "I respect Gene for what he is talking about when he's saying he's gonna get new guys in to play in KISS, to keep it going like a baseball team. I think he's right now. I'm not a fanatic KISS fan. But think about it. Forty years ago, there was a whole different New York Yankees, a whole different Rams, a whole different Lakers. They're still the Lakers, and people are still fans. So why not be a band that wears makeup that's gonna look like the characters forever. I can see Alice Cooper doing that too."

Asked what he thinks about his band VANILLA FUDGE possibly one day carrying on without any original members, the 74-year-old drummer said: "Well, if everybody's dead and somebody's got the rights to the band and they could get it going… VANILLA FUDGE is a little different because we're not cartoon characters. SLIPKNOT could do it — bands like that. SLIPKNOT, Alice Cooper, KISS — anyone where you really don't know what the bandmembers look like. Anybody can do that. If they're big enough and they have a following, they can do that."

According to Appice, a KISS without any original members would do just "fine" as a touring entity for the foreseeable future. "I guarantee you it will be fine," he said. "You know why? 'Cause eventually the big KISS audience is gonna die off and the next generation's gonna grow up going to KISS shows. I don't think they're gonna sell any records, but it's just gonna be like a show — like [the long-running rock musicals] 'Hair' or 'Jesus Christ Superstar'. They do it all around the world, different people playing it. It's gonna be the same thing. I wouldn't be surprised if they do a Japanese KISS show, a European KISS show. It doesn't even have to be the same guys."

This past June, Stanley talked to Germany's Radio Bob! about whether he thinks a KISS 2.0 version of the band could continue touring and recording once he and Simmons have officially called it quits. "I think that recasting KISS or KISS 2.0 is not what we have ever talked about," he said. "Can KISS continue and can it evolve without us in it? Well, yeah, because it's already 50 percent there. In other words, there was a time where people said, 'Well, it can only be the original four.' [And then] it was, 'Well, it can only be the original three.' Well, things move on and circumstances change.

"Could I see KISS evolving with different personnel? Yeah," he reiterated. "As big a fan as I am of what I do — and I think I'm damn good — there's other people around who could pick up the torch and bring something to the philosophy and to the live show and to the music. It would be KISS. It wouldn't be KISS 2.0. If it were to happen, yeah, it would be really just a continuation of the philosophy that we've always had, and that's that KISS is bigger than any member."

Five years ago, Stanley spoke about how he would go about finding someone to replace him in KISS. He said: "Honestly, I think all the KISS tribute bands are great, but none of them have a good 'Paul.' So I'd like to see somebody who incorporates what I've done with a lot of the things that inspired me. And it's not a matter of a puppet being me; it's somebody who comes in and contributes and adds something new to it while still following the template that's been set."