CARNIFEX, OCEANO, ARCHSPIRE and WINDS OF PLAGUE will team up for the inaugural "Chaos And Carnage" tour in the spring. They will be joined by a killer batch of younger acts BURIED ABOVE GROUND, SHADOW OF INTENT, SPITE and WIDOWMAKER.

CARNIFEX vocalist Scott Ian Lewis states: "This is our ONLY tour across the U.S. this year and we are excited to bring our biggest headlining show ever to the first annual 'Chaos And Carnage' tour. We are going to play some songs we never played live before and are ready to smash it with our heaviest set yet! Get off your asses and come party with us. It's going to be a night to remember! See you all soon."

CARNIFEX is continuing to tour in support of its latest album, "Slow Death", which was released in August 2016 via Nuclear Blast Records. The CD was produced and recorded by CARNIFEX and Mick Kenney (ANAAL NATHRAKH, BLEEDING THROUGH), and co-produced by Jason Suecof (DEATH ANGEL, CHELSEA GRIN, JOB FOR A COWBOY). "Slow Death" was mixed by Mark Lewis (THE BLACK DAHLIA MURDER, WHITECHAPEL, DEVILDRIVER, DEICIDE) at Audiohammer Studios in Sanford, Florida. Cover art for the album was created by renowned artist and longtime collaborator Godmachine. 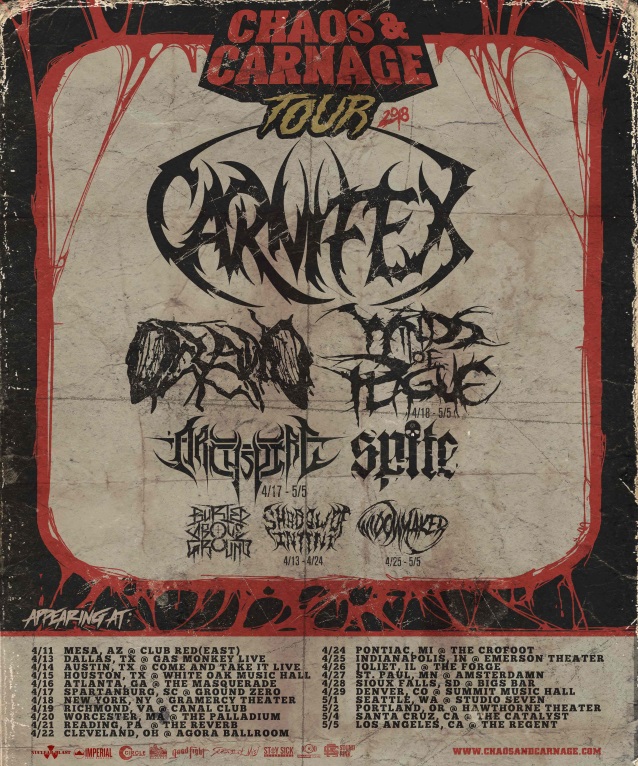