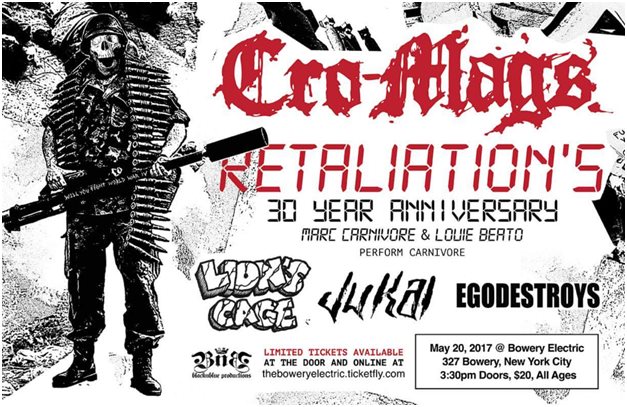 When Brooklyn, New York thrash metal crossover band CARNIVORE was first formed in 1982 by groundbreaking vocalist Peter Steele, no one could have predicted the influence they would inject into underground heavy metal culture, or the legacy Steele would carry on into TYPE O NEGATIVE. The raw energy of their aggressive and often shocking, violent live assaults reverberated beyond the walls of the New York City clubs they frequented, creating an impact acknowledged throughout the metal community even today.

CARNIVORE's "Retaliation"-era guitarist Marc Piovanetti will present "30 Years Of Retaliation" and celebrate the life of Peter Steele by performing a set of tracks from the record, including "Sex And Violence", "Jesus Hilter", "S.M.D." and others. Marc will perform vocals and guitar alongside Adam Tranquilli (BLOODFEAST, RETALIATION) on guitar and backing vocals, Jake Blochinger (CIRCUS OF STEELE, THE BANNER) on drums, and Paul LaPlaca (THOR, CIRCUS OF STEELE) on bass and backing vocal. This is the first time any type of full CARNIVORE set will be performed by an original member since Peter Steele's passing.

Limited tickets for the event are nearly sold out and are available at the door and via www.theboweryelectric.ticketfly.com. Tickets are $20 and the show is all ages. Doors open at 3:30pm.

Marc says: "I'd like to thank the Black N' Blue Bowl for hosting this year's first official anniversary set celebrating 30 years of Peter Steele's crossover masterpiece, 'Retaliation'! This incredible opportunity to finally stage my favorite musicians and perform a long-awaited showcase of songs only from CARNIVORE's 'Retaliation' is literally a dream come true.

"I've been trying to plan a proper tribute to Peter Steele's legacy ever since his untimely passing in 2010. I never got a chance to thank Peter for his incredibly positive influence on both my music and my personal life, so this show really means a lot to me. In my opinion, I think it's already kicked off the 2017 anniversary celebration worldwide. Every day fans from Europe, Asia, South America, Brooklyn, Vinnland and just about everywhere else ask me which songs we're going to play and what song we're going to open with.

"Aside from myself, there's only one other surviving original member of CARNIVORE, so I feel it's an important duty to carry on the legacy of the band. This performance is where CARNIVORE's fans, both young and 'vintage,' can finally witness the power and madness of Peter's legendary (and legendarily controversial) personal diary of thrash and mosh, live, in the flesh. I'll also be singing lead vocals at the show for the first time ever! So please wish me luck, and I'll see ya' 5/20... Children of Technology!"

Black N' Blue Bowl's "Cuzin" Joe Cammarata adds: "We are thrilled to be hosting the 13th year of the Black N' Blue Bowl in New York City, and are especially excited about the '30 Years Of Retaliation' set at the pre-show. Peter Steele had deep roots in the New York hardcore scene, having been involved in the iconic AGNOSTIC FRONT 'Cause For Alarm' album and having played so many CBGB matinees. His legacy lives on and we look forward to celebrating his life on May 20."

This year's Black N' Blue Bowl will kick off on Sunday, May 21 at 1:00 p.m. sharp and is an all-ages show. The rest of the lineup features GORILLA BISCUITS, REST IN PIECES, TOKEN ENTRY, TERROR and many more.