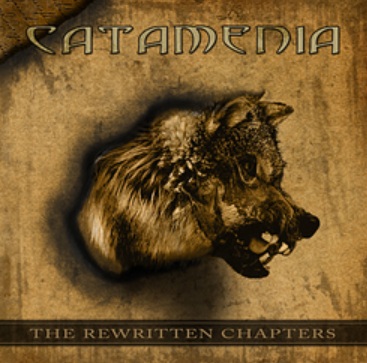 A re-recorded version of the song "Blackmension" from Finnish melodic black metallers CATAMENIA is available for free download at this location. The track, which originally appeared on 2000's "Eternal Winter's Prophecy" album, is included on the "The Rewritten Chapters" collection, which contains re-recorded and rearranged versions of 14 songs from CATAMENIA's previous albums as well as a brand new cover version of BON JOVI's "Born To Be My Baby". According to a press release, "This six-piece band brings the old songs back with better sounds and giving them some new brutality, but still respecting enough the original versions." The cover art and booklet was designed by Riku Hopeakoski and Elsa Bergström.

Due on April 27 via Massacre Records, "The Rewritten Chapters" features the following track listing:

The current CATAMENIA lineup is:

CATAMENIA's most recent album, "Cavalcade", was released in February 2010 via Massacre Records. The CD was recorded and mixed by Kari Vähäkuopus at Mastervox Studios in Oulu, Finland and was produced by CATAMENIA. POISONBLACK/ex-SENTENCED frontman Ville Laihiala makes a guest appearance on the album's opening track, "Blood Trails".