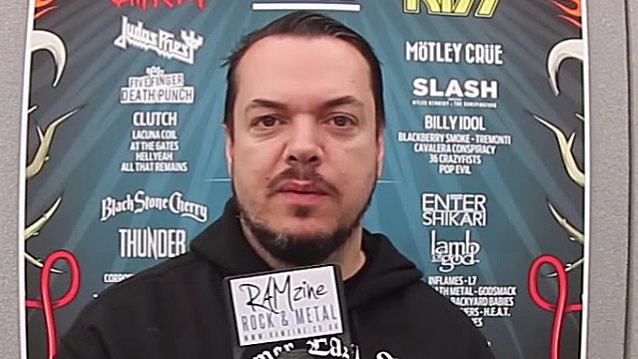 RAMzine conducted an interview with Igor Cavalera (CAVALERA CONSPIRACY, SEPULTURA) at the 2015 edition of the U.K.'s Download festival, which was held last weekend in Donington Park. You can now watch the chat below.

Speaking about CAVALERA CONSPIRACY's plans for the remainder of the year, Igor said: "[We] still [have] more shows to do, like, back and forth, between our projects. And me and Max [Cavalera, CAVALERA CONSPIRACY frontman], we've been talking also about maybe doing an EP — like a four-song, maybe, really raw [recording], again. So that's kind of, like, the end of the year for us — a lot of shows and maybe some studio [work]."

Igor also talked about SEPULTURA's early years and the inspiration that led him and his brother to form the band more than thirty years ago.

"It's weird, 'cause, for us, being from Brazil and playing that kind of music, it was almost, like, nobody could believe it, 'cause it was not common," he said. "Of course, there was already a small scene in Europe and a little in America, but coming from Brazil was a complete disaster. People were, like, 'No, you're not gonna get any gigs playing this kind of music.' All the other bands were playing more typical metal, like IRON MAIDEN and stuff like that. And we were, like, 'That's not really us.' We wanted something more extreme and faster, harder… all that stuff. So it was cool, also, to be different than all the other bands in Brazil."

CAVALERA CONSPIRACY's third album, last year's "Pandemonium", sold around 2,600 copies in the United States in its first week of release to debut at position No. 177 on The Billboard 200 chart. The CD was produced by John Gray, who previously worked with SOULFLY.