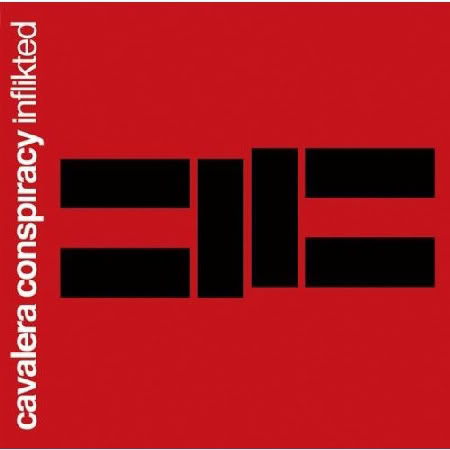 An in-studio photo gallery of CAVALERA CONSPIRACY can be found at this location.

The cover artwork of "Inflikted", the debut album from CAVALERA CONSPIRACY, has been posted online at this location. (Note: The previously circulated "artwork" for this album was used on the promotional CD only and was never intended for the finished product.)

Two songs from "Inflikted" are currently available for free download:

"Inflikted" will be released in North America on March 25, 2008 via Roadrunner Records (one day earlier internationally). Rex Brown (PANTERA, DOWN) makes a cameo bass appearance on one track. Another song is a collaboration between Max, Joe and Richie Cavalera (INCITE) on vocals.

This long-anticipated reunion between the Cavalera brothers is something fans across the globe have been waiting for since SEPULTURA's last gig at Brixton Academy in December 1996. Hailing from Belo Horizonte in central Brazil, SEPULTURA gained a legendary reputation as the one of the most highly regarded and successful death/thrash metal bands of all time, with two gold albums under their belts both in the UK and the USA — "Chaos A.D." (1994) and "Roots" (1996).

"When Igor and I met at the 10th annual D-Low Memorial Show [in 2006] and got the instruments in our hands, it was like we had never been separated. The metal was flowing in our veins," Max previously said. "It was the same in the studio."

Recording took place this past July at Undercity Studios in Los Angeles, with rising production star Logan Mader (ex-MACHINE HEAD/SOULFLY guitarist). Among the 11 songs set to appear are "Inflikted", "Bloodbrawl", "Terrorize" (formerly "Holy Poison"),"The Doom of All Fires", "Ultra-Violent" and " Sanctuary". A b-side cover of the POSSESSED death/thrash classic "The Exorcist" was also recorded.