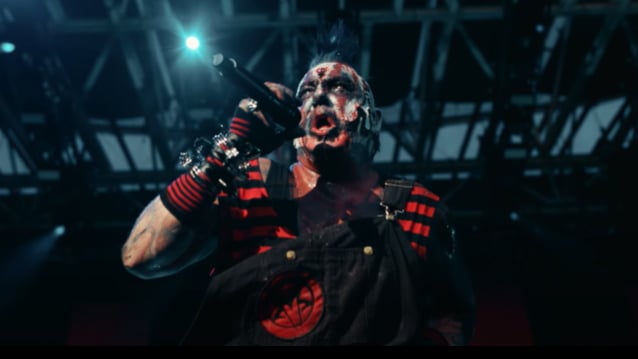 CHAD GRAY: 'I Would Be Excited To Write' New MUDVAYNE Material

In a new interview with Revolver magazine, singer Chad Gray and drummer Matthew McDonough spoke about the possibility of new music from the MUDVAYNE. The reunited metallers haven't released released any new material since 2009, which means we're coming up on nearly a decade and a half without a single fresh MUDVAYNE song.

"That's obviously something we got to cross, right?" Chad said. "There's two ways you can do it. You could go out, and you can go once around the rock and just play catalog. For sure, that's absolutely a possibility. Or you can try to put something together. You can gauge it, you can decide. I'm not going to say because I've been constantly writing, recording touring for the last 12 years with HELLYEAH. So I don't think my well's dry by any means. And I'm excited, I would be excited to write with these guys.

"We've done a little bit of file sharing or whatever. Just some riffs. Greg [Tribbett, guitar] went into the studio in Texas. He lived in Texas. He went in there and just laid some stuff down, sent it to Matt. Matt put just a really simple metronome drum beat to it. I was working on it. It's pretty rad, different stuff. I've got a few different angles that I'm working with kind of how I want it to be, my parts anyway. But it's cool, it's cool. And obviously we're not going to put something out if I don't feel like it stands up.

"It's going to have to fucking blow my hair back before I would put it out, because I wouldn't want to put anything out and then people are just, like, '[They] can't do it anymore.' You can be your own judge of that. And maybe it's not the first song, maybe it's not the third song, maybe it's the seventh song. That's like, okay, now we're on something, but we'll figure it out, man. We'll figure it out. We'll either do it or we won't. But yeah, I'm down for whatever right now, I'm having fun with it."

As for what a new MUDVAYNE album might sound like, McDonough said: "I can't honestly say. Some of the stuff that we have messed around is heavy. We messed around with some typical [sounds], people wouldn't be terribly shocked, but the opportunity to experiment and given our past success, I think I feel a sense of freedom. There hasn't been any kind of pressure from any professional direction to try to, 'You guys going to write another 'Dig'.' Or 'Not Falling' or whatever; nothing like that. So the headspace and the culture around the band right now is incredibly positive. So I personally just would like to be wide open and excited and positive about it. I want to be surprised."

MUDVAYNE recently completed a co-headlining U.S. tour with ROB ZOMBIE, dubbed "Freaks On Parade". Produced by Live Nation, the 21-city "Freaks On Parade" tour kicked off on July 20 at the Hollywood Casino Amphitheatre in Maryland Heights, making stops across the U.S. in Tampa, Holmdel, Tinley Park, and more before wrapping up in The Woodlands at Cynthia Woods Mitchell Pavilion on August 21. Support on the trek came from STATIC-X and POWERMAN 5000.

Gray fell off stage during MUDVAYNE's July 26 concert in Tampa, Florida. The incident happened when Chadand his bandmates were performing the song "Not Falling" at MidFlorida Credit Union Amphitheatre.

A few days after the incident, Gray joked about the irony of him falling off stage while singing "Not Falling", calling it "crazy" and "unbelievable".

MUDVAYNE formed in 1996 and has sold over six million records worldwide, earning gold certification for three albums ("L.D. 50", "The End Of All Things To Come", "Lost And Found"). The band is known for its sonic experimentation, innovative album art, face and body paint, masks and uniforms. MUDVAYNE is Gray, Tribbett , McDonough and Ryan Martinie (bass).