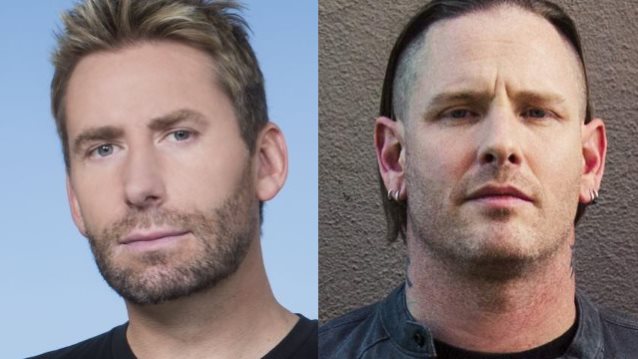 Chad Kroeger has slammed STONE SOUR as "NICKELBACK Lite" and has challenged Corey Taylor to "write a hit song."

The NICKELBACK frontman made his comments while being interviewed by Sweden's Metal Covenant on May 27 in Stockholm. As he was discussing NICKELBACK's musical versatility, Kroeger told the site (see video below): "I can't think of another band that's as diverse as we are. I can't. And I don't think that's me talking from pride or ego. I mean, you're sitting across the table. You know what you're talking about." He then asked the journalist to name another band that covers such a wide musical palette as NICKELBACK.

After the writer mentioned STONE SOUR as an example of a band that is also "very diverse," Chad shot back: "Yeah, 'cause they're trying to be NICKELBACK." He then took a swig from his beer and directed his comments at the STONE SOUR singer: "Corey Taylor has said some really nasty things about me before in the press. He talks about how easy it is to write a hit song. Well, show me. Show me. Write one. I have yet to hear one. They're okay. But they're not as good as NICKELBACK. They sound like 'NICKELBACK Lite.'"

Kroeger went on to point out that NICKELBACK and Taylor's other band, SLIPKNOT, launched their respective careers while signed to the same label (Roadrunner). He added: "They had to put on masks and jump around. How good can your music be if you've gotta beat each other up on stage, throw up in your own masks every night…? I mean, music shouldn't come with a gimmick; music should just be music. None of my favorite music comes with a gimmick. And he got tired of sitting behind a mask — he wanted people to know what he looks like — so he started STONE SOUR."

In a 2002 interview with Rock Sound magazine, Taylor seemed to suggest that Roadrunner was spending more time and resources promoting NICKELBACK than they were getting behind SLIPKNOT. "I'm glad they could use our money to make fucking NICKELBACK happy," he said. "That's a very, very bitter subject for me, and if I ever see any of those fuckers, it's going to be brutal." He continued: "I'm happy for them, but at the same [time], we went out and bust our asses to make what we did. If they're still here in a couple years then, hey, good for them, but this band isn't going anywhere, and when the record label basically fucks your loyalty in the ass, it's really bitter — especially when we went out and fucking bled, sweat and earned every fucking album that we sold. MTV won't fucking touch us, radio barely fucking touches us and here comes those fucking pretty boys... and the lead singer looks like Shaggy from 'Scooby Doo'... and what the fuck am I supposed to do? Am I not supposed to feel bitter when I have broken bones and fucking torn corneas? It's bullshit, and the record label just smiles at you and goes 'Yeah, yeah whatever...' It's fucking not right, dude."

Taylor added: "It's just the fact we could have used the help. We have fucking fought for everything we have fucking made, when is someone going to help us, and when is someone going to step up and fight for us? The record label doesn't do that for us. It'll go to bat for fucking NICKELBACK, but when it comes to us, it's fucking shutdown. It's, like, what the fuck? I'm fucking proud of what we've done, but goddamn it, when are we going to get given a hand? I'm so fucking tired of it."

NICKELBACK's ninth album, "Feed The Machine", was released on Friday, June 16 via BMG.

The band is set to hit the road this summer on the colossal headlining "Feed The Machine" tour. The trek will begin on June 23 in Noblesville, Indiana, with 44 dates across North America including stops in Detroit, Los Angeles, Chicago, Toronto, Vancouver, and more.

STONE SOUR's new album, "Hydrograd", will be released on June 30 via Roadrunner Records.

The band is the special guest of KORN on the latter act's "Serenity Of Summer" trek, which started on June 16 in Salt Lake City and will wrap on August 2 in Cleveland.