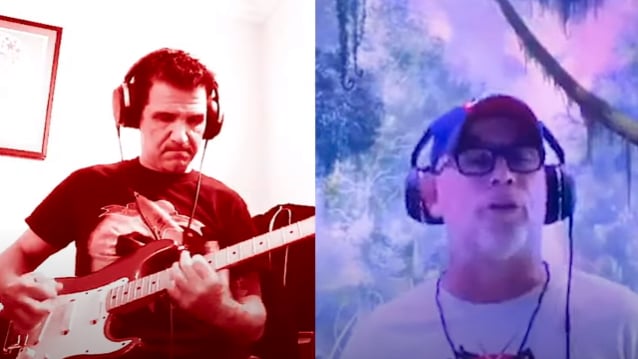 Benante uploaded the video to his YouTube channel and included the following message: "An intimate version from the Sound of white noise album with my Friend- Happy Anniversary . If you like the song , please just enjoy it for what it is and nothing else"

A little over a year ago, Bush and Benante reconnected on stage at a METAL ALLEGIANCE concert in San Francisco, California to play the ANTHRAX songs "Only" and "Room For One More".

Bush fronted ANTHRAX between 1992 and 2005 but was sidelined when the band reunited with Joey Belladonna for a 20th-anniversary tour. When that collapsed, and relationships disintegrated with next frontman Dan Nelson, Bush returned for a time before Belladonna took the job back in 2010.

In a 2018 interview with 69 Faces Of Rock, Bush revealed that he hadn't spoken to Benante since John declined to re-record Nelson's vocals on the band's "Worship Music" album when he was asked to. He explained: "I didn't participate in [the songwriting process for the album], and I always had on previous records… I even said, 'Okay, if you pay me this amount of money, I'll do it.' And I gave some crazy figure, because I wasn't doing it out of the love of my soul, I was doing it for another reason. So I was, like, 'Then you've gotta pay me for it.' And that's when Benante got all livid on me and freaked out, and we still haven't spoken since then."

During the same chat, Bush said that the only member of ANTHRAX that he was still in contact with was guitarist Scott Ian. "I see Scott on occasion," he said. "So I have a relationship with Scott, because I see him more often, but I have not talked to Charlie or Frankie [Bello, bass] — I haven't spoken to them since, literally, that time. And, you know, it's weird and kind of probably sucks, but they haven't made an effort to call me, and I haven't made an effort to call them either, I guess. There was some weird stuff that happened when Charlie's mom passed away. I actually did reach out to him, but maybe I had the wrong number or something. I don't know… And so he was, I guess, bent out of shape about that. But… I did actually do it — I really did; I wouldn't lie about that. Obviously, when it [comes] to personal, all the other stuff is meaningless. But, you know, whatever… It is what it is. And there's no reason for me to be okay with Scott and not okay with those [other] guys, 'cause I had a relationship that was the same with all of them. It wasn't like me and Scott were closer and those guys weren't. We were all close at one point."

Bush temporarily rejoined ANTHRAX for a number of shows in late 2009 and early 2010 but stepped aside in May 2010 in order to make room for the return of Belladonna. Belladonna was the lead singer of ANTHRAX from 1984 to 1992, and was considered part of the band's classic lineup (alongside Dan Spitz, Scott Ian, Frank Bello and Charlie Benante),which reunited and toured during 2005 and 2006.

Although Belladonna did perform the Bush-era song "Only" live with ANTHRAX on a couple of occasions, the track has since been dropped from the band's set. "We've got enough songs [that were originally recorded with me on vocals]," Joey explained in a 2016 interview. "We've got enough material; I don't need to go back. I'd just as soon leave that alone. I mean, once in a while I get people complaining, and then after a while, it got really old too. I hate that whole thing, 'cause we're not even the same… We happened to be in the same band, but it's a completely different thing."