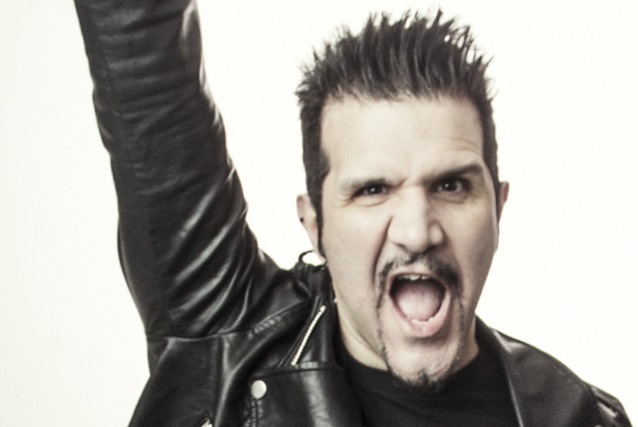 Charlie Benante says that he has around "seven or eight ideas" demoed for ANTHRAX's next album.

The band's upcoming 12th studio disc will be the follow-up to 2016's "For All Kings", which was widely hailed as one of the strongest efforts of ANTHRAX's career.

Asked in a new Metal Wani if he has commenced the songwriting process for ANTHRAX's next LP, the drummer said (hear audio below): "I'm happy to say that I've demoed lots of songs. And I'm already pretty much on our way to the start of making another record. It's just gonna take a little time to all get together and start to arrange and start really crafting the tunes. But, yes, I have started writing songs, and it sounds really good. [I have] probably around seven or eight ideas [demoed right now]. It's probably gonna be another goal of mine to have 20 songs to choose from, like with the last album. I just wanna have as much as possible so we can say, 'Those are great. Okay, we need to work on those a little more.' Just have a variety."

Benante, who is ANTHRAX's main songwriter, also confirmed that there are several tracks left over from the "For All Kings" sessions which did not make the final cut. However, it's unlikely that any of that material will surface on the upcoming record.

"I always say that [some of the unused ideas could serve as a starting point for the next album], and then I always scrap it," Charlie said. "It's, like, 'Nah. The newer stuff is better than that stuff.' But sometimes a little piece of a song will come into play, so I wouldn't rule that out."

"For All Kings"' arrival followed a five-year period during which ANTHRAX experienced a rebirth of sorts, beginning with the band's inclusion on the 2010 "Big Four" tour with METALLICA, SLAYER and MEGADETH, and continuing with the 2011 release of comeback LP "Worship Music".

In December, ANTHRAX guitarist Scott Ian said that he had heard "some killer riffs" that Benante had sent over, "and, in my opinion, they're awesome, and that makes it very exciting moving forward." He added that he was confident that the next ANTHRAX record would "be fucking amazing.'"

Benante told "Rock Talk With Mitch Lafon" last year that the new ANTHRAX music he has been writing is "sounding very pissed off and angry again. I think maybe it's just a reflection of the world and everything in general in this so-called business," he said. "I don't know why it's coming out like that, but it's coming out very — like I said — angry and pissed off and just very aggressive."

ANTHRAX's upcoming disc will be the band's third full-length release since the return of singer Joey Belladonna, who came back into the fold for the "Big Four" shows, in the process helping inspire a new wave of creativity.

ANTHRAX will support SLAYER on the first two legs of the Tom Araya-fronted outfit's last-ever North American run of dates. Also scheduled appear on the bill are LAMB OF GOD, TESTAMENT and BEHEMOTH (with NAPALM DEATH replacing BEHEMOTH for the second leg).