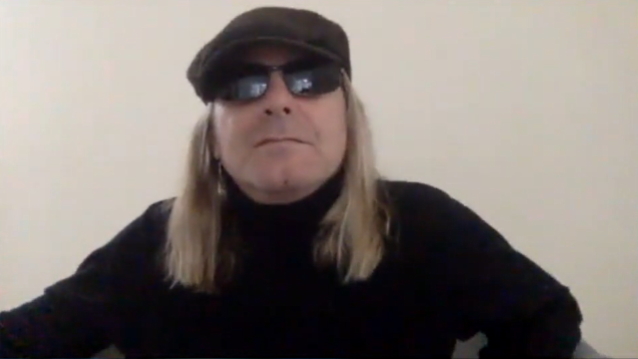 In a new interview with "The Jeremy White Podcast", CHEAP TRICK singer Robin Zander was asked to weigh on a recent comment made by KISS frontman Paul Stanley about how "there isn't a real reward" in classic rock bands making new music, with fans preferring to hear the hits.

Zander said: "I think the difference is that we make records for ourselves, not necessarily for fans and stuff. We've always just made records for ourselves. I think if we stopped making records and stopped writing songs, we'd probably quit. That's the point; that's the way we look at it. Paul, he'd just soon rest on his laurels and go out there and play and cash in. But I just don't feel that way — that's all."

Robin's latest comments echo those he made last November when he told AXS TV's "At Home And Social With": "We've made a lot of records, and we just continue making records — for ourselves mostly, but also for our immediate fans that still cling to us. It's something, I think, that is our lifeblood; it keeps us going… And I believe that we still make quality records. If we didn't, we probably wouldn't do it anymore."

Last month, Stanley told USA Today that he doesn't really see a "reason" for KISS to make any new music. "For the most part, when classic bands put out new albums, they're looked at and listened to and thrown away because they don't have the gravitas, they don't have the age that comes with something being a time capsule or being attached to a certain period of your life," he said. "I'm not alone in that. When you see any classic bands on TV or if there's a concert video, turn off the sound and I'll tell you every time they're playing a new song because the audience sits down.

CHEAP TRICK will release its 20th studio album, "In Another World", on April 9 via BMG.