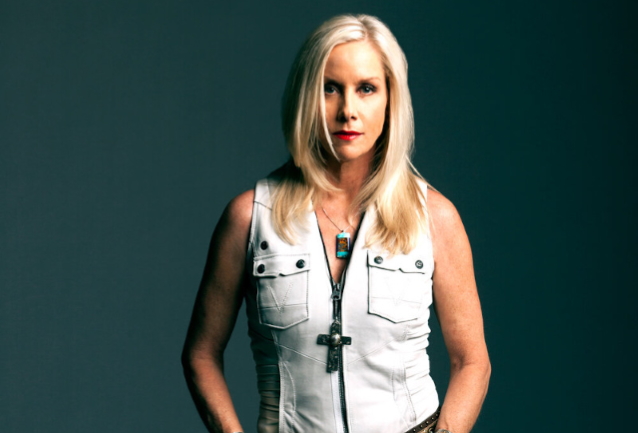 1970s icon and ex-THE RUNAWAYS singer Cherie Currie has weighed in on the face mask debate, saying that everyone should "absolutely" wear masks during a pandemic.

Currie addressed the hot-button issue as lawmakers push harder for their constituents to wear face masks to limit the spread of coronavirus. Months after his own advisers recommended it, President Donald Trump finally wore a mask in public earlier this month during a visit to wounded service members at Walter Reed National Military Medical Center.

Speaking to Singapore's LAMC Productions, Cherie said (see video below): "I think, absolutely, people should wear masks. I think when I wanna walk from my house to my car, I don't need to wear a mask; or if I'm walking my dog down the street with no one around that I need to wear a mask. Personally, I'm allergic to… if I start to sweat, I find it very difficult to breathe. But I also know that it's not good to breathe in your own carbon monoxide while you're exercising or anything like that.

"We're going through the same thing [in California] that you're going through [in Singapore] — strict lockdowns," she continued. "And yesterday, they shut everything down again because there is a spike in positive cases. I mean, there are more people in the hospital — of course there would be, if the protests and the rioters and everything else. I thought for sure that that would cause it. And I don't know exactly what did, but I know that the people who are staying home and wear the mask didn't cause this spike. I think we'll find out eventually.

"We're getting to the point of no return, and that's what scares me. I wonder what happens when the remedy kills the patient, and when the economy cannot recover and therefore people are dying because they've lost everything. I think we should have the right, if you wanna wear a darn spacesuit, wear a spacesuit. Then let these people go out and work. Stick to the guidelines, but…

"I know we're at the point now of no return, and I think that our leaders are not doing a very good job of protecting people's businesses — they're just not," Cherie added. "And they're not doing the right thing, in my opinion. And a lot fear, too. You just can't let fear run you into the ground. And I'm sure you guys get it too — it's just constant bad news. They overdo it on the media and really put the fear of God into people. And I wish they wouldn't do that.