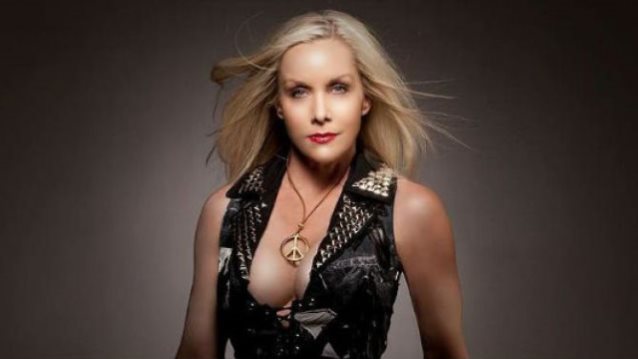 Cherie Currie, a former member of the pioneering '70s all-female rock band THE RUNAWAYS, was interviewed for episode 56 of the "Australian Rock Show"podcast. You can now listen to the chat using the audio player below.

Speaking about reconnecting with her former RUNAWAYS bandmate Lita Ford in 2013 to record a special holiday song, Cherie said: "I literally had nightmares about Lita up until just a few years back. When she reached out to me to do a duet with her, a Christmas single called 'Rock This Christmas Down', I flew in from the road and went directly to the studio from the airport and worked with her on this song. And she called me when I was driving home and she was in tears and I was in tears listening to the CD, because I think it was a great relief for both of us, because Lita had felt.. She had been hearing that I left the band because of her, which was very true. She was the last nail in the coffin for me, but I think it was a great relief for both of us to be past that, because, you know, there's nothing worse than regret. To carry regret with you all your life, that's no way to live. We've had some great times since."

Asked if she thought THE RUNAWAYS' music has become more acknowledged since the release of "The Runaways" movie, Cherie said: "Definitely. And I remember twenty years ago, I couldn't even listen to our music or did I even know that there were videos online. And Lita had reached out to Sandy West [drums] and myself to get Joan [Jett] to do a reunion, and this was a little over twenty years ago, and we convinced Joan to do it, and then Lita backed out. After we had a record deal and everything was set, Lita just said, 'I can't do this.' And it was so funny, because she was the one that had originally brought us all together. But it was at that time that I started to listen to THE RUNAWAYS music again and I started watching videos, and I was so shocked with really how magical the five of us were together; we really were unique. But I had thought that we had all but been forgotten, to be honest with you — truly."

Currie told The Sydney Morning Herald that she had some reservations about the way THE RUNAWAYS' story was told in the 2010 biographical film starring Kristen Stewart and Dakota Fanning as Jett and Currie. "What upset me most about the movie was that Lita wasn't involved and Jackie [Fox, bass] wasn't involved and that was no doing of mine or Joan's," she said. "Lita was just misled by her then-husband as far as the contract was concerned.

"Jackie [now a showbiz lawyer] wanted to be a producer as well as be paid just an enormous amount of money that was almost laughable … so they cut her out of the movie."

Today, Currie looks back on THE RUNAWAYS' accomplishments with pride. "We did what we believed in," she told The Sydney Morning Herald. "We stood up for girls, very young, that didn't think they had it in them. At that time, we weren't sure that we did either. But we changed the history of rock'n'roll. And I'm proud that I was part of it."

In a 2015 interview with the WHMH (Rockin' 101) radio station, Lita stated about the prospect of a RUNAWAYS reunion: "Joan doesn't want anything to do with it, which… I think she's wrong. 'Cause now is the perfect time, and we would all love to see it now. There was a time when they called me and asked me for a RUNAWAYS reunion, but it was early '90s — NIRVANA was just kicking in, and it was really bad timing; it wouldn't have worked. People would have just turned their nose up at it. But now, to do it now, I think now is the perfect time. And I'm all for it, Cherie was all for it. We never spoke to Jackie about it, because we couldn't get Joan's approval. Had we gotten Joan's approval, we would have spoke to Jackie. But we couldn't get a 'yes' or a 'no' out of Joan."