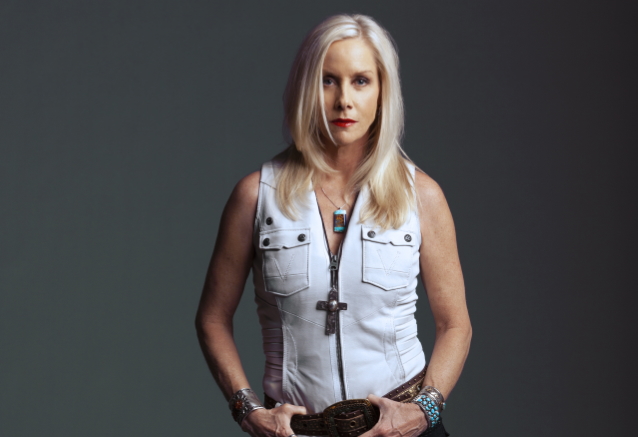 In a new interview with the the "Hangin' & Bangin': Artists On Lockdown" online show, Cherie Currie spoke about the possibility of a reunion of iconic rockers THE RUNAWAYS. The first true girl band of the 1970s, THE RUNAWAYS — which also featured Lita Ford, Joan Jett, Jackie Fox and Sandy West — toured internationally and made a dent in the charts before calling it quits at the end of that decade.

"Lita and Joan have a little bit of an issue, and that just seems to be the problem," she continued. "Lita doesn't like [Joan's producer and manager] Kenny [Laguna]. I wish they would get over it, honestly, but I don't think so."

Currie went on to say that her own relationship with Laguna suffered after her latest solo album, "Blvds Of Splendor", was delayed for nearly a decade before it arrived last year.

"Kenny was my manager [during the early stages of making 'Blvds Of Splendor']," she said. "We were very good friends for 20 years. But then, unfortunately, with the record, with them holding up 'Blvds Of Splendor' for 10 years, that kind of eroded my friendship with him a bit."

In November 2018, Ford told the Daily Mail that a reunion of THE RUNAWAYS will probably never happen. She explained: "Joan Jett is very much in 'Joan Jett land,' I guess you could say. Will she ever come out of Joan Jett land? I don't think so. I think her manager controls that and it's really up to him and her. It seems to me like Joan Jett's manager just runs her life in every way, shape, or form. He's very controlling and he has a real problem with me. He has a real issue with me. He sees me as a threat, which is ridiculous, because she's like my sister and I love Joan. It's ridiculous, it's uncalled for, and it's caused a little bit of rivalry between her and I, which is totally uncalled for. It's his fault."

Ford claimed that Jett's manager has prevented her from even talking about a RUNAWAYS reunion with Jett.

"The hard part is just trying to communicate with Joan without her manager involved," she added.

"We had dinner a couple of years ago, what was supposed to be a girl's night out, and she brought her manager with her.

"So it's like, "Dude, answer the question. I'm trying to ask you a question. Are you interested in putting THE RUNAWAYS back together?' She never answered the question."