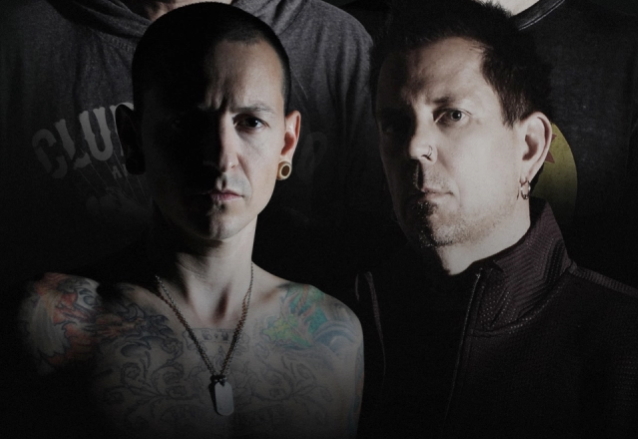 CHESTER BENNINGTON Was 'On Top Of The World' Two Nights Before His Suicide, Says His Longtime Friend

Sean Dowdell, the drummer for Chester Bennington's pre-LINKIN PARK band GREY DAZE, has once again opened up about his late friend's mental state before his tragic death nearly four years ago. The singer's passing was ruled a suicide soon after his body was found in July 2017 at his home in Palos Verdes Estates, California. Bennington had been candid about mental-health battles in numerous interviews over the years, saying he grappled with depression, anxiety, suicidal thoughts and substance abuse.

Asked in a new interview with Anne Erickson of Audio Ink Radio if he was surprised that Chester ended his life, Dowdell said (hear audio below): "Over the years, he did struggle in several different areas. But in the weeks and months leading up to his life-ending choice, I guess, is the best way I can put that, I did not sense anything. I talked to him two nights before he passed. He was on top of the world. He was excited about starting rehearsals. He was excited about a lot of things. We were working on a new business location together. I didn't sense anything. Now, eight or nine months before that, my wife sensed something in him and said, 'Chester's not right. Something's off.' And I said, 'No, no, no. He's just trying to go for a new look or whatever.' And she said, 'No. I can see something in his eyes.' And she literally said that to me. And I just blew it off, like, 'No. I don't think so.' And then, of course, what happened, happened. And it's easy to look back and go, 'Oh, yeah. She saw it.' But you never truly know what's happening in someone's mind."

He continued: "Had Chester been thinking rationally, I don't think he would have done what he did at all. I just think that that's what depression does — it removes the rational thought process from the moment that you take that choice. And sometimes there's somebody there to help talk you out of it or to guide you in a different way or to distract you away from it, but the way this happened, it didn't. There was nobody else there. And when that hit him at that specific moment, there was nobody else for him to lean on at the time, and that's the most unfortunate thing, I think."

Bennington had been open with the press and public about his struggles with drugs and alcohol, which landed him in rehab twice around 2006.

Bennington's friends told Rolling Stone that he fell off the wagon for three days in August 2016 and drank until he blacked out, adding that he had been consuming alcohol again as recently as October 2016. Bennington's longtime friend Ryan Shuck, who played with the singer in DEAD BY SUNRISE, thought Bennington may have had "a couple of drinks" before hanging himself on July 20, 2017.

Investigators found no illegal drugs or prescription drugs while searching Bennington's home following his passing, although a partially consumed bottle of alcohol was found in the bedroom where the 41-year-old singer’s body was discovered.