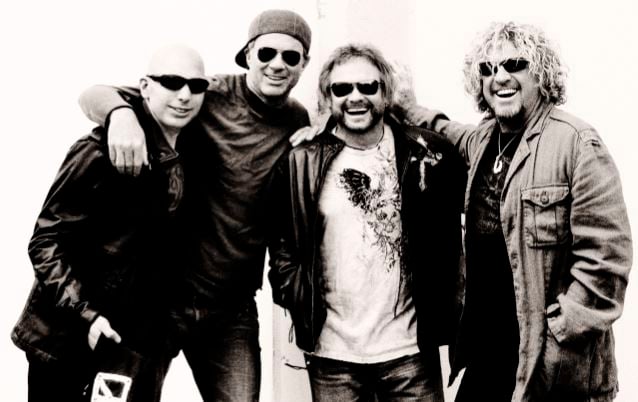 Legendary guitarist Joe Satriani has revealed that CHICKENFOOT in "about ninety-nine percent finished" recording a brand new song and is planning to play a one-off concert in May.

The group, which also includes former VAN HALEN singer Sammy Hagar, ex-VAN HALEN bassist Michael Anthony andRED HOT CHILI PEPPERS drummer Chad Smith, has not made a CD in five years but recently returned to the studio to record a new track, "Before I Die", to be released later in the year.

Speaking to the Northwest Music Scene about CHICKENFOOT's future plans, Satriani said: "It looks like we're going to do a show in the middle of May. I don't think it's public yet, but I don't really care if you mention it. We're getting together, just one show, the original band. I think it's a Lake Tahoe show. We're kind of working around the schedule of Chad, who's got a rehearsal schedule at that point with the CHILI PEPPERS. I'm in between my U.S. and European tours, and I know there's a Benioff Children's Hospital benefit that I do with Sammy and James Hetfield [METALLICA], which comes up about a week before that, so it comes up like right in the middle or early May; maybe the 7th or something like that. And then we've got a track that's pretty much done; it's about ninety-nine percent finished. We actually recorded a song."

He added: "We're the slowest-working band in history; we take forever. But there is stuff happening, and we're still laughing and communicating."

Hagar recently described "Before I Die" as "the coolest song that we've maybe ever had. It's really bluesy and edgy and modern and it's fucking cool."

Hagar also once again clarified comments he made to Rolling Stone magazine where he was quoted as saying that he thinks CHICKENFOOT is finished making albums.

"To go in the studio and spend a half a million dollars to make a great record that's going to sell forty or fifty thousand…. maybe a hundred thousand records, [you] basically pay to play and you're going to lose money on that," he said. "And then you go out and tour with a band that could sell two or three thousand tickets in any city in the world, but, you know, flying around in a private jet and staying in Four Seasons hotels and all of that and with these four guys, we're all rich, so it's like, we don't need the money, but at the same time, to go out and do 60 or 70 shows and come back and make as much as I make in one night after a year of that, is pretty hard."

He continued: "I don't do things for money, but it's pretty difficult to put everything else aside. Because I'm saying, 'Okay, if I'm putting a year of my life aside, I'm not going to make any money, number one. Which I don't need money, it's okay, I can get away with that. But the energy that it takes to do all of that and my fans sit there and hound me, as much as they love CHICKENFOOT, they hound me to go out and do [the songs from my history]. 'We want to hear this song, we want to hear that song,' and I'm going, 'Fuck, now I've gotta go back out and work again, I'm fuckin' beat,' you know?"