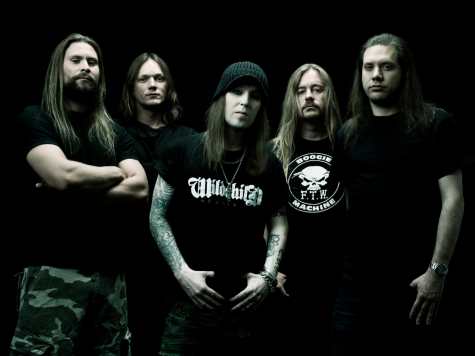 CHILDREN OF BODOM Frontman To Be Released From Hospital Tomorrow

Finnish metallers CHILDREN OF BODOM were forced to cancel several shows earlier this month — including those in Oslo, Norway and Malmö, Sweden — after the band's guitarist/vocalist Alexi Laiho was rushed to the hospital with extreme stomach pain.

After spending the last week and a half receiving treatment in Oslo, Alexi will be released from the hospital tomorrow (Thursday, July 12) and the band will perform at this year's Ilosaarirock festival, which is scheduled to take place July 13-15 in Joensuu, Finland.

CHILDREN OF BODOM recently inked a worldwide deal (excluding Japan) with Nuclear Blast Records. The band, which kicked off a year-long celebration of its 15th anniversary with a successful North American tour alongside labelmates ELUVEITIE, has a new studio album planned for release in 2013.

"Holiday At Lake Bodom (15 Years Of Wasted Youth)", a very special CD+DVD career retrospective in celebration of CHILDREN OF BODOM's 15th anniversary, spotlights specially selected tracks from every one of CHILDREN OF BODOM's critically acclaimed albums (1997's "Something Wild", 1999's "Hatebreeder", 2000's "Follow The Reaper", 2003's "Hate Crew Deathroll", 2005's "Are You Dead Yet?", 2008's "Blooddrunk" and 2011's "Relentless Reckless Forever"),plus two newly recorded (and undeniably fun) cover songs and detailed liner notes penned by the members of CHILDREN OF BODOM themselves. The DVD portion of the package includes "candid touring and backstage footage from around the world”, plus the "Shovel Knockout" video.