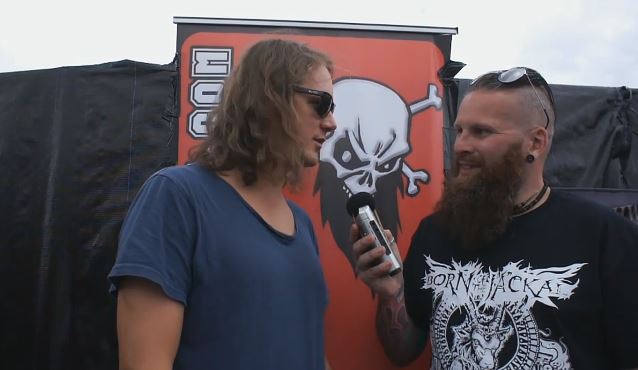 MikeJamesRockShow.com conducted an interview with bassist Henkka Seppälä (a.k.a. Henkka T. Blacksmith) of Finnish metallers CHILDREN OF BODOM at this year's edition of the Bloodstock Open Air festival, which is being held August 7-10 at Catton Hall, Walton-On-Trent, West Midlands, United Kingdom. You can now watch the chat below.

The tour launches on October 4 in Denver, Colorado and includes five Canadian cities before closing out in Hollywood, California on November 1.

Said CHILDREN OF BODOM frontman Alexi Laiho: "We've rolled with MACHINE HEAD quite a few times in the past. My best memories are kick-ass shows, parties, camaraderie and vocal coaching from Robb Flynn way back in 2008, so I think we'll have a good time tearing it up all over North America! Not a bad way to end the long and non-stop tour cycle for 'Halo Of Blood'!“

CHILDREN OF BODOM kicked off a six-week major-market North American headlining tour on February 14 in Quebec City, Quebec, Canada and hit 32 markets across the U.S. and Canada before wrapping with a two-night stand at New York City's Irving Plaza on March 28 and March 29. The tour featured support from folk metal heroes TÝR and represented CHILDREN OF BODOM's first Stateside headlining run since the release of the band's new LP, "Halo Of Blood".

CHILDREN OF BODOM's eighth album, "Halo Of Blood", sold 8,400 copies in the United States in its first week of release. The CD was made available in June 2013 in North America via Nuclear Blast Records. The cover art was created by Sami Saramäki, who was responsible for the artwork on previous CHILDREN OF BODOM albums "Follow The Reaper", "Are You Dead Yet?" and "Hate Crew Deathroll".