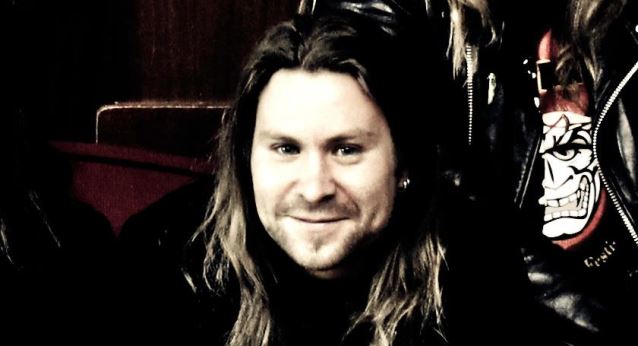 Drummer Jaska Raatikainen of Finnish metallers CHILDREN OF BODOM has revealed that he was diagnosed with three prolapsed discs in his lower back during the band's fall 2013 European tour. He writes on his Facebook page: "I was exhausted from all the constant touring that started last summer. It was almost five months in a row and I definitely needed these two months of doing nothing and giving my time to my family and myself. Also, I had very bad back pains during the European tour that I was hospitalized for a day in Spain. They found out that I had three prolapsed discs in my lower back, but somehow I made it through the tour. I am stubborn. So, I really needed all this time to recover totally. My back is OK now, but I need to work on it a lot.

"I am convinced we don't have to cut songs from the set list [on CHILDREN OF BODOM's current North American headlining tour] at all like we did on the Euro tour some nights. Just to let you know, it might happen, and there is a reason for it."

CHILDREN OF BODOM six-week major-market North American headlining tour kicked off on February 14 in Quebec City, Quebec, Canada and will hit 32 markets across the U.S. and Canada before wrapping with a two-night stand at New York City's Irving Plaza on March 28 and March 29. The tour features support from folk metal heroes TÝR and represents CHILDREN OF BODOM's first Stateside headlining run since the release of the band's new LP, "Halo Of Blood".

New York fans will have the opportunity to see two unique CHILDREN OF BODOM shows, a different set each night. In addition, 100 two-night packages are available for New York City which include one ticket for each evening, early entry to the venue both nights, an exclusive show poster and access to the VIP Balcony section.

CHILDREN OF BODOM's eighth album, "Halo Of Blood", sold 8,400 copies in the United States in its first week of release. The CD was made available on June 11, 2013 in North America via Nuclear Blast Records. The cover art was created by Sami Saramäki, who was responsible for the artwork on previous CHILDREN OF BODOM albums "Follow The Reaper", "Are You Dead Yet?" and "Hate Crew Deathroll".