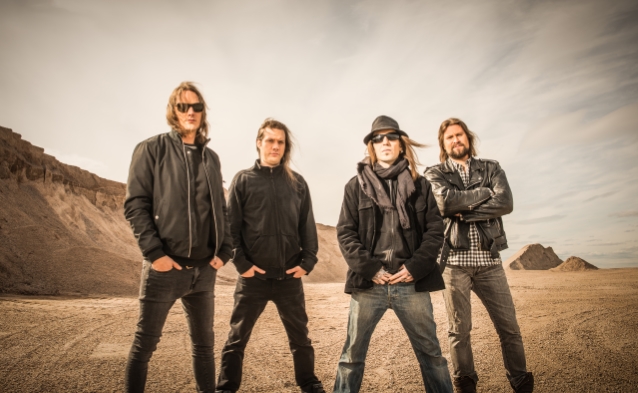 CHILDREN OF BODOM's New Album Will Be Released In March 2019

CHILDREN OF BODOM bassist Henkka Seppälä (a.k.a. Henkka T. Blacksmith) has revealed to TNT Radio Rock that the band's 10th studio album will arrive next March.

Asked how the material on the disc compares to that on 2015's "I Worship Chaos", Henkka said (see video below): "This is always difficult for me. It's really, really hard for me to say. It's very CHILDREN OF BODOM, but there's always something new. I think maybe the one feature that I haven't heard in a while is more technical riffing, guitar riffing, where Alexi [Laiho, guitar/vocals] is pushing his abilities to their limits. So, I think that kind of stuff. And once Alexi compared this a little bit to the feeling 'Follow The Reaper' had. I'm not sure. But in those basic riffs, there's something to that."

Seppälä recently said that the new CHILDREN OF BODOM album will contain 10 songs.

The follow-up to 2015's "I Worship Chaos" was once again recorded at CHILDREN OF BODOM's own Danger Johnny Studios in Helsinki where the group's last two efforts were laid down. Helming the sessions for the new disc was producer Mikko Karmila, who worked on "I Worship Chaos" and 2013's "Halo Of Blood".

CHILDREN OF BODOM guitarist/vocalist Alexi Laiho told Metal Hammer back in May that the band's new album would be "a lot more straightforward as far as song structures go. 'I Worship Chaos' was also pretty straightforward, but it's got more of a rock 'n' roll vibe to it. It's still metal and dark and shit like that, but I'd say it's more rock 'n' roll."

CHILDREN OF BODOM's last U.S. tour saw the band celebrating the 20th anniversary of the release of its debut album, "Something Wild". The 24-date trek included an appearance at last year's Ozzfest Meets Knotfest.