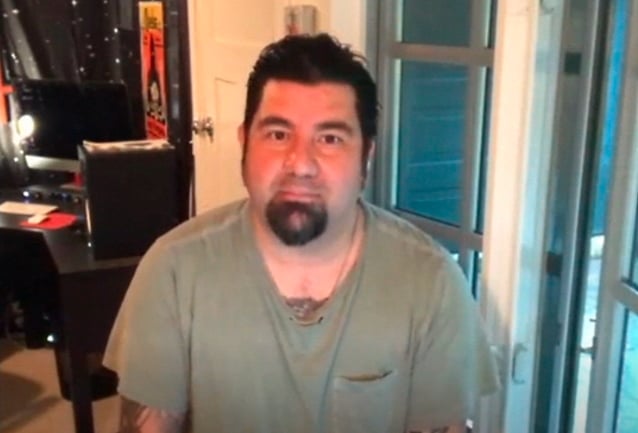 CHINO MORENO On Upcoming DEFTONES Album: 'Our Main Goal Was To Make Sure That Everybody In The Band Was Involved'

DEFTONES vocalist Chino Moreno joined Zane Lowe on Apple Music to run through his "At Home With" playlist. Chino talked about the forthcoming DEFTONES album, the 10th anniversary of "Diamond Eyes", working with longtime producer Terry Date, how the band has stayed together so long and overcome hardships, his approach to vocals, making music every day, and the possibility of re-releasing "White Pony".

Speaking about DEFTONES' follow-up to 2016's "Gore", Chino said: "We started the record last summer... Even before that, we were taking our time and just doing at our leisure. We just started the mixing process a couple of months back. It kind of worked out as far as doing it remote, because our producer, Terry Date, who's doing the record, he's in Seattle. As a band, we're all kind of spread out anyways. So he's just kind of been working on it and then sending us stuff, and we'll send it back with notes, and this and that, whatever. Usually, it would be a little more expedited had we all been able to be in the same room at the same time. But it's working out. He just finished his first full round of mixing the whole record, and now it's going back to little things and particular things on each song. So we're using the time by still working on the record. There's no rush, obviously, for us to get out and do anything. So we're just taking our time with it."

Elaborating on DEFTONES' decision to reconnect with Date for the band's new album, Moreno said: "We had a great time working with Terry on all our records. He did the first, I think, four records of ours… Since trying out all these different things, we've always wanted to go back and make records with him again. We actually started doing a record with him, which was [to be] titled 'Eros'. We got maybe two-thirds of the way through and that's when [late DEFTONES bassist] Chi [Cheng] had his accident and everything just shut down in our world. And when we reconvened, we started with 'Diamond Eyes', and at that point we worked with Nick Raskulinecz on that record and then went on a journey in that direction. But we love Terry. He's pretty much been there since the beginning of us making records, and we just vibe with him really good. I mean, he's super easy-going. He's not a producer that is in there trying to push his ideas into what we're doing other than just capture what it is that happens when we get together, as well as speaking up and telling us when stuff isn't where it should be or whatever. So he's just a great dude, and making this record with him was awesome. I think our main goal was to make sure that everybody in the band was involved, to an extent. I think our best records are when we're all firing on all pistons, each one of us individually and collectively. So that was, I think, the only thing that we aim for, really."