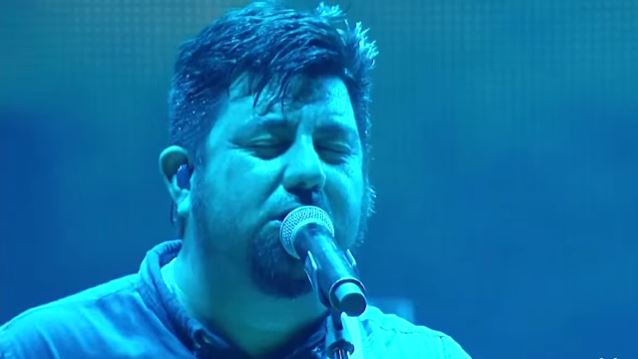 DEFTONES singer Chino Moreno spoke to U.K.'s Kerrang! magazine about the progress of the recording sessions for the band's follow-up to 2012's "Koi No Yokan" album. He said: "When we make records, we never really go in with an idea of what we're trying to do, or what kind of record we're trying to make. We want to go on the vibe that's created by us being in the same room. All in all, it's the five of us doing what we do, so it's definitely a DEFTONES record. But with this one, I feel like it's a little more technical, maybe. We're constantly trying to see how far we could take things in different directions. That's what keeps you entertained."

Asked about the lyrical themes covered on the new DEFTONES album, Chino said: "It's hard to say, because we're right in the middle of it now and I don't go in and say, 'Hey, I'm gonna write this song and it's gonna be about this person, or this theme.' The music is what inspires the lyrics and the songs have a lot of different moods. I'm not gonna say it's a happy record, [but] it's not a completely angry record."

He continued: "One thing about this record that I like is that the songs complement each other. In the end, we're going to have to take four or five songs out of the collection and that's going to be the hardest thing."

According to Moreno, sixteen songs were written for the new album, which was once again produced by Matt Hyde (SLAYER, CHILDREN OF BODOM, MONSTER MAGNET, WINDS OF PLAGUE).

As previously reported, DEFTONES has tapped Jerry Cantrell (ALICE IN CHAINS) to lay down a guest guitar solo on the CD, tentatively due in September.

Chino told RollingStone.com about the new DEFTONES material: "The songs are amazing, and we wrote them in a really cool way. We had all of us in a room together with one person expressing an idea and another person jumping on it. The songs are really built as a collective. We have five guys who have almost completely different takes on music, so when it works, it works great."

"I think it's a little more of a heady record," Moreno said when asked how the DEFTONES' new material compares to that on "Koi No Yokan". "I feel like we've gone into the songs and really dissected them. If something sounded a little straight, we took a left turn and made things a little screwy. We just tried something completely opposite, not to sabotage it, but to challenge ourselves and try new things that we haven't done in the past.

"It definitely feels like we've taken a step from our last record," he continued. "But it's definitely a DEFTONES record, and it has all the elements that make us who we are. We're not going out there to change anything, other than just thinking outside the box."