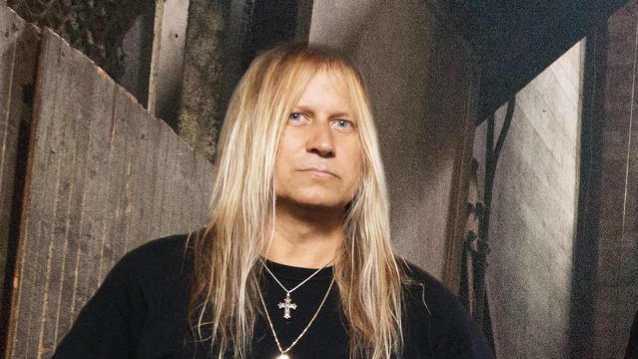 Guitarist Chris Caffery (SAVATAGE, TRANS-SIBERIAN ORCHESTRA, SPIRITS OF FIRE) recently appeared on "The Metal Command" podcast. The full conversation can be streamed below. A few excerpts follow (as transcribed by BLABBERMOUTH.NET).

On the origins of SPIRITS OF FIRE, his project with Tim "Ripper" Owens, Mark Zonder and Steve Di Giorgio:

Chris: "I love playing with Ripper. He's such a great singer, and I was just looking for an opportunity one day to do that. I never really was making plans about it, and I was approached by people to do 'project bands' or whatever people call it... People wanted to put me together with things, and a lot of times, it never really attracted me because I was always very busy with what I was doing, and I just didn't want to be a part of something that I wasn't really that into. Then when Frontiers called me about this one, it was kind of odd that they just came out of nowhere with the name of Ripper for it... to me, it was something that appeared like a fun chance to put something together. This particular project to me was presented as fun, and I was, like, 'Wow, I can kind of replace the old feeling I had when I worked with [original SAVATAGE vocalist Jon] Oliva on DOCTOR BUTCHER, where I was just putting together a metal record.' That's kind of what it was with this."

On what he learned from Roy Z, who produced SPIRITS OF FIRE's self-titled debut album:

Chris: "Out of the 11 songs on the record, Roy had written three of them. When he gave me those songs, I was playing the leads... When Roy played it, he had solos on it, and I knew I had to be doing solos, and I'm, like, 'Man, I have to play something that's as good as what that guy did.' He raised my lead playing out to a level to where he was going to get those solos that he was going to really like... He just had a great ear for how to make things sonically work, and he was a really fun and friendly person to work with. He was so humorous. If you did something that he didn't like, he had the funniest way of talking about it.... He was just a comedian. It was really fun to work with him."

Chris: "You didn't really have to think about anything when you were writing. It was just, like, 'I'm going to write this song, and I don't have to worry about what the guitar is tuned like. I don't have to worry about what key it's in. This guy is going to be able to sing something that's going to work'... He was very easy to work with. He's just great. There will be probably another 10 records that he has a vocal track on in one way or another this year, and the reason why he gets that much work is because there are not that many singers who are that good. He's almost a novelty in the fact that he's able to sing all those different kinds of vocals that well and do what he does. He's special."

On having his solo albums judged against the SAVATAGE catalog:

Chris: "SAVATAGE was so loved by a lot of people, and there were so many critically acclaimed things that happened with that band, that when you do things after it, they expect that level of everything you do. If you're Zak [Stevens, latter-day SAVATAGE vocalist] or Oliva, they're really comparing what you're doing vocally to things at that kind of level. I was just trying to make some really fun records and enjoy it... I did it for me to have fun, and that was the main reason for me to be singing and doing solo records. I didn't necessarily want to join a band that I wasn't really into or didn't have a full year working with, where it was just a part-time kind of a band. I just made solo records and made music. It was fun for me."

Chris: "With TSO, even before we played the very first show, he was just so in tune with where he wanted this thing to go. It was crazy. I don't even think we had the first record out yet, and we were trying to do something, and I was discussing the scheduling with him, and he was, like, 'No, you don't get it, Chris — when TSO headlines arenas...' We hadn't even played the first show yet, and he's telling me about when this band goes and headlines arenas. His vision and his work as a visionary in that sense were really so magical... All these things that he said were going to happen really came out of his vision and his desire to make this thing so special to people and their families and the fans and everybody involved... The magic is not gone. He is always going to be there, and we're living to keep his legacy alive. We're all who we are, and that thing is what it is, because of him. It's never going to be exactly the same as it was when he was alive, but we're going to do whatever we can to make sure we keep his legacy alive."

On guesting with Doro:

Chris: "When Joe [Taylor] decided to leave and I wound up having the chance to play with her for about a year before she took Bas [Maas] in as a permanent member of the band, that was something that was really special to me. Doro is such an icon, and she's such a hard worker. She would do 14 nights in a row doing a two-hour set, and she could be sick with the flu or something, and you never knew it, because she gave every bit of her body and her life and her soul to her fans and her shows. It was just a privilege for me."

Caffery spent the first part of May on tour with DORO once again during an East Coast co-headlining trek with METAL CHURCH.

SPIRITS OF FIRE's self-titled debut was released on February 22 via Frontiers Music Srl.