TEMPLE OF THE DOG — the Seattle supergroup featuring SOUNDGARDEN's Chris Cornell, PEARL JAM's Jeff Ament, Stone Gossard and Mike McCready, and drummer Matt Cameron (who plays drums with both SOUNDGARDEN and PEARL JAM) — will reunite for the first time ever to tour in celebration of their self-titled album issued 25 years ago. TEMPLE OF THE DOG came together in 1990 in the wake of MOTHER LOVE BONE frontman Andrew Wood's drug overdose.

The seeds for the band were planted by Cornell, who was roommates with Wood. The album went platinum and the band has reunited for one-off performances, but they have never toured.

Of the tour, McCready told Rolling Stone: "I hope if these [shows] go well, there will be more in the future. That's kind of why we didn't want to do an extensive tour. We just wanted to feel out the landscape. I hope we can go to Europe. It depends on how much fun we have with it, and how much people get out of it."

But Cornell stressed that a second TEMPLE OF THE DOG record is less likely. "We'd have to feel really great about the songs," he explained. "It's a scary thing. I don't want to say they'd have to live up to the [first] album, but I wouldn't want it to take away from it either. It was the same issue with reforming SOUNDGARDEN. I'm super excited about writing new songs as long as we don't detract from what came before, and ultimately we did that. I think the same thing would apply to TEMPLE."

Eddie Vedder, PEARL JAM's lead man, was part of TEMPLE OF THE DOG, but he is not listed as among the members taking part in this tour. Asked if there is a possibility of a Vedder guest appearance at some of the shows, McCready said: "I can't say anything about that. I don't know if he is, and that's kind of up to him. I would love it if he did." Added Cornell: "I don't think that's even been discussed, but we certainly haven't planned on it."

On September 30, UMe will release a special TEMPLE OF THE DOG 25th-anniversary reissue collection of their landmark album, newly mixed by Brendan O'Brien. The collection will be available in four configurations, including a four disc Super Deluxe, a double LP, a two CD Deluxe, and a single CD.

Physical pre-orders are available today along with a detailed list of the contents of each configuration here. 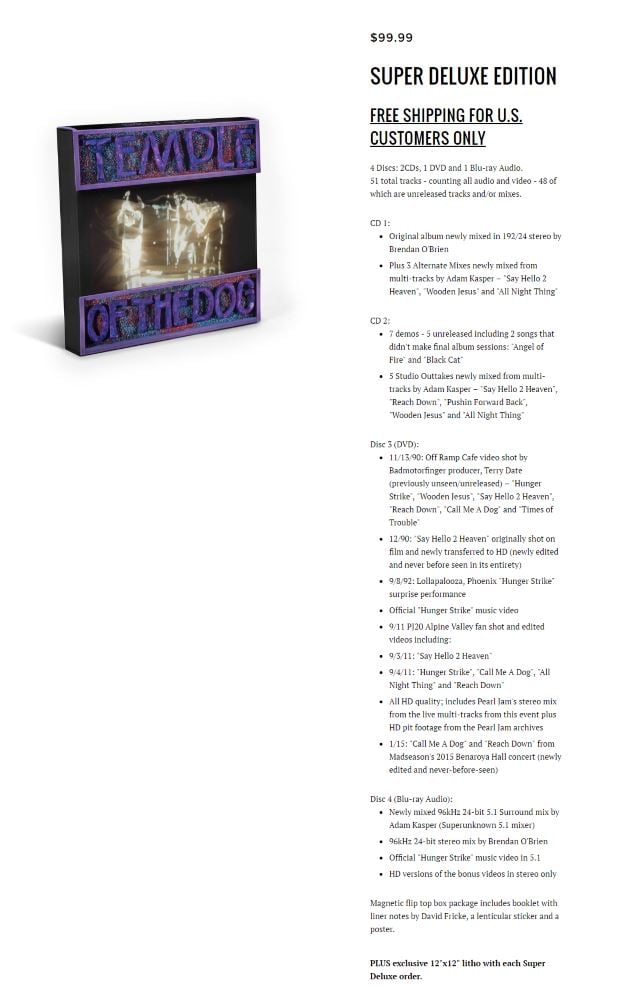