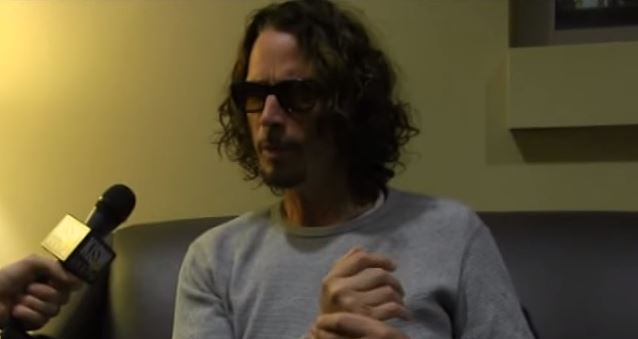 Steve Migs conducted an interview with Chris Cornell before the SOUNDGARDEN singer's sold-out September 25 solo concert at Benaroya Hall in Seattle, Washington. You can now watch the chat in three parts below. A couple of excerpts follow (transcribed by BLABBERMOUTH.NET).

On living up to commercial expectations that people place on his music:

"I personally firmly believe that, especially with commercial success, if that's your aim, as a songwriter, I think you have to sort of get in that lane early on and stay there, 'cause there's a whole bunch of stuff, I think, you've gotta work out. And I never worked any of that out. I never felt like… And I saw this with a lot of bands. I always felt like if most of the people that came up with me and came out of the world that I came out of and my band came out of, if they seemed to try to write for commercial success, it probably had less commercial appeal somehow. And I always felt that way with me. I felt like I can write ten songs, and if one of those ten songs somehow has a broader appeal, it's an accident. But that accident will happen occasionally. And I'm not necessarily ever the best judge of it. I don't feel particularly in touch with the commercial side of music as a fan, and I never was; I was always someone, even from as early as eight years old, I can remember, I was someone that liked the deeper album tracks and I liked the songs that I didn't hear on the radio, the songs that my friends hadn't heard. I'm not sure why. There was a different sort of approach to it, possibly — not so much as writing it, but maybe producing it. Maybe the artist or the producer or the label felt like, 'That's not a song we're gonna have a hit with, so we'll put that as the ninth song on your album,' or something. And maybe what went into making that song is something that appealed to me, that is why I like music that's different than, I suppose, what makes commercial music. I'm not really sure. But the short version of the answer is that I always felt like I will do my best as a songwriter and an album recorder if I don't consider any of that, and I will have probably a better chance at having popular songs if I don't do that."

On how his solo career influences his work with SOUNDGARDEN:

"With what I do as a solo entity, I'm always kind of bouncing back and forth and it always feels refreshing both ways all the time, and I think that that's a good thing. I think that, in a sense, yeah, you sort of go out into the world, and then you come back, and it's sort of two different worlds where you can kind of bring some aspects from one into the other and cross those back and forth all the time. And I also think that there's something healthy in the trust of a band, for example, allowing each other to do that and supporting each other when they do that. I think that that creates a really strong core relationship thing that you bring back into your band and it makes you believe in you guys even more."

Cornell's fourth solo studio set, "Higher Truth", was released on September 18. His first album on his own since 2009's controversial "Scream" is in the singer-songwriter vein and very different from his work with SOUNDGARDEN.

Cornell kicked off the "Higher Truth" acoustic tour on September 18 in San Diego, California at the Balboa Theatre. The trek will wind down on November 4 in Phoenix, Arizona at the Orpheum Theatre.